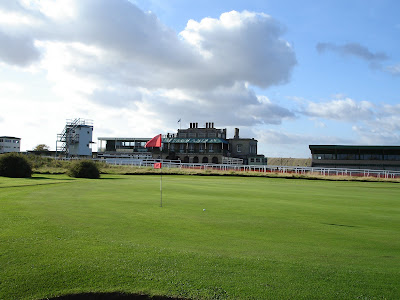 I first visited this course in June 2002 with Graham, Donald, JD, Brian and some of the other regular Humpties. We'd decided to play somewhere on our way back from a golfing holiday in Northumberland and had been trying to get on at The Roxburghe just outside Kelso. We were all pretty worn out after a hectic week of golf and late nights but the Roxburghe was busy and expensive. By contrast, Kelso looked refreshingly flat, easy walking and more within our remaining budget, but all we ended up going home, with some of the guys not keen on playing what had at the time they thought looked a pretty uninspiring course.

When I finally got round to playing Kelso on 16 October 2009, I was pleasantly surprised by the quality and excellent condition of the course. The fairways were a delight and although the greens had been treated in readiness for winter and were not cut as closely as they would be in summer, they were still very good, if a little slow and bumpy. We'd clearly missed a treat some 7 years ago! Uniquely, the Kelso course is completely surrounded by a racecourse, with the racetrack cutting across several holes. Indeed, the first tee is only 20 yards or so behind the track, with the railings 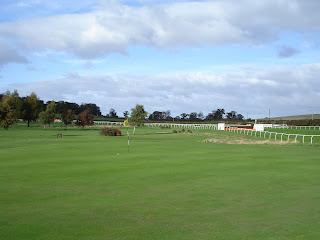 looking as though they'd come into play for anything miss-hit. I was joined on the course by Mike, a former Club Captain, who explained that when the hurdles track that surrounds the course was built, much of the soil required was taken from inside the railings, meaning that the golf course now sits below the level of the racetrack, which drains onto the golf course. A large open drain "The Stank" runs through the course to improve drainage and provides a real hazard on several holes, as a couple of Mike's shots proved! Another feature of the course is that most of the trees and bushes are trimmed to about 10 feet, to maintain lines of sight from the grandstands to the racetrack, with the track owners keen to tackle some silver birch trees that at present add character and definition to the course. I got the impression that the relationship between the racecourse and the golf club could be interesting at times!

There are a number of really good and interesting holes at Kelso, but Home Strait, the 11th, was my favourite a 497 yard par 5 off the back tee, with an out of bounds all the way down the right. Mike explained that the club was not allowed to put down a white line or posts to define the out of 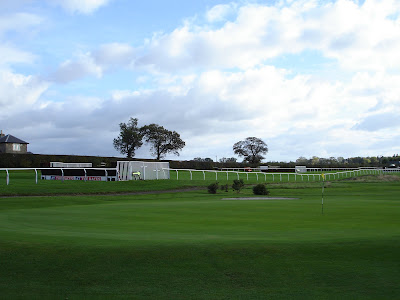 bounds and relied on a road beside the racetrack for definition. Creosote had been used to mark the boundary, but this was discontinued on health and safety grounds, lest jockeys land on the creosote. I'm not sure I understand that, given the greater risks associated with falling off a galloping horse!

I also enjoyed the 12th, 13th and 14th, a good stretch of holes, and the 18th deserves mention too. An uphill 466 yard par 4 played into the setting sun, with the racetrack coming into play a few yards in front of the green. Sadly, my wedge to the green found a bunker to the right and after getting a lob wedge to within a couple of feet, my missed putt was an anti-climax for what had been a very enjoyable round in the great company of a man steeped in the history of his club and rightly proud of it. Thanks again, Mike.
Mike also had the shot of the day, a 60 yard pitch and run at the 10th, which being deadly accurate but slightly overstruck hit the flag and bolted off to the right, straight into a greenside bunker. We both laughed and it was only some time later that I realised that golf is the only game I know in which you can laugh at the misfortune of a stranger and not get thumped or told in no uncertain terms where to go.
I went round in a creditable 84, but a good handful of shots were down to the trickiness of the greens. I'd missed a short putt on the 3rd for a par 3 and had 6 or so practice putts from inside 3 feet, all without success. I'd go back to Kelso one day to play that hole in particular. It owes me and I reckon I must have seen everywhere not to go by now.

Posted by Alan McPherson at 12:33 No comments: 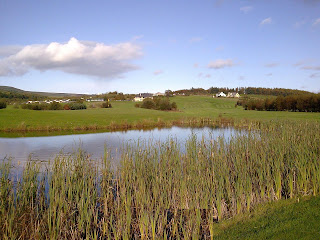 – Polly and I played this on 8 October 2009 having been impressed by the high quality of the club’s website. This was clearly a course to be played in dry summer conditions, as some parts were quite low lying and looked to be prone to flooding. Unfortunately, we’d played it too late in the year, forgetting that inland courses in the West of Scotland can be less well drained than our own seaside course in North Berwick. Although there had not been any heavy rains of late, parts of the Brunston Castle course were quite boggy, with preferred lies in operation. As a result, it played quite long and as the greens had also been hollow-cored and sanded very recently, scoring was difficult. That’s my excuse anyway, having lost to Polly by a couple of Stableford points in what, to borrow the football cliché, was a low-scoring match.

Although we thought that Brunston would undoubtedly look and play better in the Summer months, we struggled to spot a signature hole. Perhaps it was just that the course wasn’t busy and was clearly being made ready for winter that put us off, but it just seemed that none of the holes were inspiring, with several medium length par 4s either looking or playing similar to each other. I liked the 10th, a shortish par 4 played from an elevated tee down to a generously wide fairway, with the second requiring a longer shot than you think, over a hidden river some 20 yards wide. Having missed the fairway to the right (requiring some skill given the width of the fairway!) I also had a large tree to contend with, managing a rare par after a good wedge from heavy, wet rough over the tree and the river to within 20 feet. Polly’s second shot came to grief amid dark mutterings about a silly place to put a river anyway, and she much preferred the 18th, mainly because it was the last.

Brunston may have been slightly disappointing, but we did discover a real gem on the way home, in Balbir’s Indian Restaurant, near Symington on the A77. Outstanding, and a place to be visited again and again, as there are lots of courses in Ayrshire still to be played.
Posted by Alan McPherson at 17:59 No comments: