Also known as Monktonhall, this is an excellent 18 hole parkland course on the edge of Musselburgh, a small coastal town to the east of Edinburgh and is another of the 200+ courses that I'd already played when I started writing this blog. I played it again on 27June 2018 as part of my current work for a golf magazine, to identify and rank Scotland's Top 100 courses.

The Monktonhall course owes its origins to the Open Championship's long association with the town, which hosted the Open on what is now the Musselburgh Old Course 6 times in the 1870's and 1880's. Musselburgh as a town has had 5 Open Champions, winning a remarkable 11 titles between them, so Musselburgh has a uniquely important place in the history of golf. When the Honourable Company of Edinburgh Golfers moved from their home at what is now Musselburgh Old to their current location at Muirfield in 1891, they took with them the local venue for the Open.  In an attempt to re-establish the town's link to the Open, the Musselburgh Town Council decided to build a new championship standard 18 hole course.  Unfortunately, land only became available in the 1930's and the 5 times open Champion, James Braid, who had become a renowned golf course architect by then, was commissioned to design the new course at Monktonhall, on the outskirts of the town.  The course officially opened in 1938 and has remained largely unchanged ever since, apart from some newer teeing grounds. Braid had commented at the time that "if you want a championship course, you need length."  That's the key word that still comes to mind, and as the Course Guide says, "to have any hope of conquering this course you have to be able to keep the ball in play while still being long off the tee."

The course can certainly be long, at 6842 Yards from the very back tees, but I played it again from the "more manageable" Yellow tees, at 6241 Yards, Par 69.  Interestingly, the course scorecard also provides a men's par and SSS from the Ladies' Red tees, recognising that for some (dare I say more mature?) members, even the Yellow tees provide an extremely difficult challenge.  This is a good idea that I wish more clubs would follow. 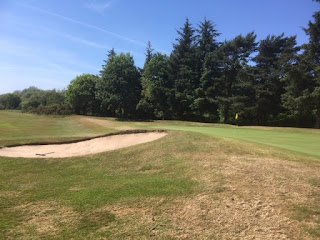 The course starts with a downhill tee shot on a 346 Yard Par 4, with OOB to the left of the fairway.  I'd not had time to warm up so it was no surprise that my tee shot, as overseen by watchful eyes from the clubhouse windows etc I suspected, headed hard left towards the OOB.  Missing that by a yard, I was happy enough to scramble an opening bogey on what was by far the shortest of the 13 Par 4s.  The weather had been  hot and sunny for what seemed like weeks on end, so the fairways were really dry and running a lot faster than might be expected of a parkland course.  Indeed, high spots on the fairways were clearly turning brown and crusty, with the course playing more like a links.  This is a side view of the front of the 2nd green with a ridge running at an angle to the green.  In typical parkland conditions, the front would be receptive to most shots but being so hard and dry, it was more difficult to judge how short game shots would play.  Indeed, my approach to the left side green had run 30 yards, almost finding the bunker on the right.  This was an early warning that although the course was playing shorter than normal, scoring well might still be very difficult. 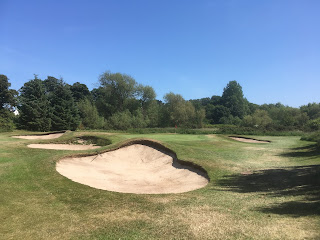 The shortest hole is the 3rd, at a mere 124 Yards, but the target looked small from the tee, with bunkers aplenty to contend with.  Note the overhanging steep faces to the biggest bunker here.  I hit the green OK but my ball ran off a side slope, leaving an awkward pitch from bone hard fairway over a bunker.  Thankfully I managed a bogey. The 4th is a good and partially uphill Par 5 and by then I was noticing that the fairways were generously wide, such that a moderately mis-hit tee shot escaped real punishment.  However, length was still an issue and my trusty 3 wood was needed to get anywhere near to the green.  An easy enough par, but I bogeyed the next couple of holes after finding bunkers.  Next came the formidable 7th, a 441 Yard Par 4, requiring a really long drive if you're to have any chance of reaching the green in regulation.  If, like me, you don't clear the ridge in the middle of the fairway and don't bother to consult the Course Guide, you risk finding the large bunker some 60 Yards out from the green.  Some of the bunkers had extremely steep faces, and unusually, balls would hold on them, rather than run down to the bottom of bunkers.  I'd an awful lie in this particular bunker, with my ball at knee height, so another bogey on the card. 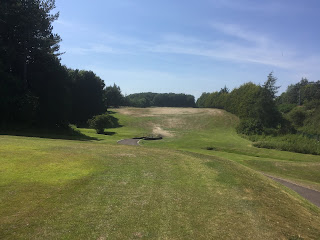 The course is laid out in 2 sections, Holes 1-7 and 16-18 are separated from the rest of the course by an extremely busy railway line.  Holes 8-15 are on the other side of the railway and are also adjacent to the A1 main road from Edinburgh to East Lothian and beyond.  These holes were affected by rail and road traffic noise but were still very interesting.  The 8th, as shown here, played a lot shorter than its 386 Yards, the fairway was particularly dry and golden brown and lay slightly above the tee, so a good tee shot hit over the deep gully that found the fairway would run close to the green.  Similarly, the 9th, as shown below, was downhill and the only real concern was avoiding the little burn in front of the green.  A good hole! 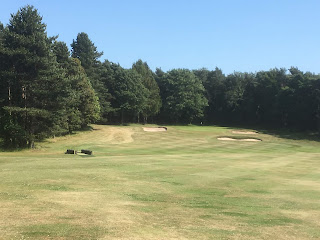 I was out in an unremarkable 42, or 7 over par.  However, this wasn't too bad taking into account the length of the Par 4s.  From work that I do for our amateur golf governing body in reviewing the Standard Scratch Scores of courses for handicapping purposes, I know that a bogey golfer is considered likely to be able to hit a drive of 200 yards and a second shot of 170 Yards, including roll.  Of the 6 Par 4s on the Front 9 here, only the 1st hole is shorter than 370 Yards i.e. within range in 2 shots by a bogey golfer.  In other words, someone at my handicap level is likely to drop a shot at those holes unless they either hit longer than usual or can somehow scramble a par from short of the green.  For example, the 7th at Musselburgh is a meaty 441 Yard Par 4, so a bogey golfer might be expected to need 3 shots to reach the green.  Factor in the fairway bunker I'd found and this is a really difficult hole. 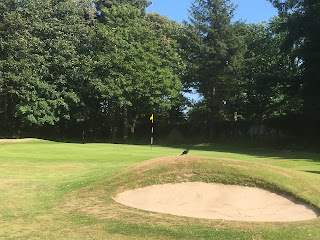 The Back 9 has 7 Par 4s, ranging from 367 (close to the limit of the distance a bogey golfer could expect to hit in 2 shots) to a formidable 463 Yards.  Musselburgh is a good course, but by the time I'd finished I was wishing there had been a little risk and reward Par 4, driveable for the big boys and giving us shorter hitters some much needed variety in second shots.  There's nothing wrong with the occasional 300 Yard Par 4, well defended by bunkers etc. as necessary, giving players the chance to hit an accurate wedge, but I seemed  to be reaching for my 3 woods or rescue clubs after drives on the majority of the Par 4s.  For example, the 12th was a 463 Yard Par 4.  I'd hit a good drive and 3 Wood but still needed a pitch over a greenside bunker to reach the green.  Note the crow in this photo of that bunker. I landed within a yard of it and it never so much as turned its head as if to ask if that was the best I could do! The only time I'd get close to a birdie, I thought. 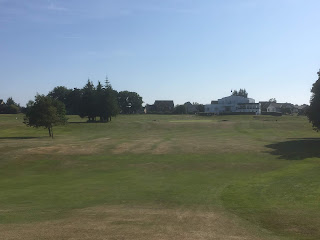 Oddly enough, I also thought one of the best holes at Musselburgh was the last, a 424 Yard Par 4 that climbs up to finish in front of the clubhouse, as shown here. Once again, It's important to hit your longest drive, but this hole usually plays into the prevailing wind so good luck if you're a short hitter.  There's also a ridge  across the fairway so your second shot might be blind.  This hole is also a Par 4 (at 474 Yards) off the White medal tee and I wonder how many members can regularly reach in 2.  I'd gone round in 84, net 74, with 31 putts, so not too bad, I suppose.  The course had been in really good condition, with the greens in particular being excellent and I'd enjoyed the experience, in hot sunny weather.  Musselburgh is well worth playing but be prepared for some long holes and a really stern test.  As Mr Braid said, if you want a championship course, you need length.  The same can be said if you want to play this course really well.


Posted by Alan McPherson at 10:33 No comments: