One of the great pleasures I've had in writing this blog over the years has been the many contacts I've had from blog readers, either commenting on the courses I've played, the experiences they've had in playing golf in Scotland, or just saying hello and encouraging me to keep going in the quest to play every course.  I hope in a small way I've opened eyes to the possibilities of coming to Scotland and playing the remoter "hidden gem" courses, alongside our more famous courses. 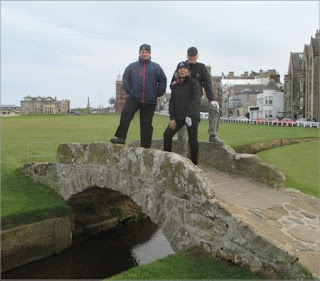 Just recently John and his family from Vancouver in Canada contacted me about his family's forthcoming visit.  They'd already played dozens of courses including the likes of Scarista on Harris and Covesea, two of the finest 9 hole courses you'll find in Scotland, far off the beaten track. This time they were tackling a pilgrimage to the Old Course, the Castle and some other established premier courses in the area. This is John and his family on the iconic bridge on the 18th on the Old Course.  I'd managed to fix them up with Garry, another long-time blog reader and Facebook friend who works as a caddy on the Old Course and I'm glad they had a great time. They even managed to play the Castle in 50 mph winds, which is real dedication to the game and a sample of what true links golf can be like.

Playing into a 4 club wind when you already have a 3-wood in your hands and the green is only 150 yards away, double bogies can be a very good score. Brutal in one sense but hugely enjoyable in another, if you don't take the scores seriously!  I played on the same day in a seniors competition at Dunbar GC, a top quality links course that's just as exposed to the elements as the Castle and got blown away, losing 3 balls and a ton of energy in the process.

I hope John and his family return to Scotland sometime soon, as there's still a huge number of challenging courses out there.  Meanwhile, back at the Glen GC in North Berwick, (see www.glengolfclub.co.uk), we're still working on a new ultra HD flyover that we hope will stimulate further interest in playing our own hidden gem.  Next time John, the Glen's green fees are on me!


Posted by Alan McPherson at 12:08 No comments:

As regular readers will know by now, there is no fully comprehensive list of golf courses in Scotland using our definition of "a golf course." However, Scottish Golf, the body that administers the amateur game in Scotland, lists 587 affiliated clubs, many of which have more than one course.  Put it another way, there are 587 "official" clubs in Scotland registered with the sport's governing body, so that's a pretty decent target for any course bagger to aim at.  Last autumn I was in touch with Scottish Golf about something completely different so I asked them to check their records against what I'd already played, including recent courses such as Royal Troon's Championship course.  Scottish Golf confirmed that I had played every course that they recognised within their list of affiliated clubs.  It was a relief to know that I'd not missed any on the "official" listing of 18 and 9 hole lay outs, but the journey continues.

I've now done 669 courses in total and I've a very short list of "other" courses still to play. These are mainly pitch and putt courses, academy courses attached to recognised golf clubs or small private courses on private land scattered across the country. I hope to get round these courses eventually and although courses are still closing in Scotland due to lack of members and funding problems, there are encouraging signs that some new courses will be opening in the years ahead.  So, the journey may never be completely finished.  The best I can hope for is to have played every course open at the time and to add new courses as and when they are opened.

In the meantime, this is what Scottish Golf published on their website (www.scottishgolf.org) in November 2016 about my progress so far. This is me, Craig and Stu about to board the plane to Fair Isle - a great trip!

An East Lothian golfer has defied heart surgery to fulfil his dream of playing every affiliated golf course in Scotland and raise valuable funds for charity.
Alan McPherson, 66, has spent the last six years spending his retirement travelling up and down the country to play at all of Scottish Golf’s 587 affiliated clubs, as well as a host of par-3, pitch & putt and private lay-outs.
It’s been like ‘Munro bagging’ for the golf nut, who has now played 669 courses in total.
However, the East Linton local, who is in his last few weeks as Match Secretary at The Glen GC, saw his ambitious plans suffer a setback in January when he had triple heart bypass surgery.

Alan at Corrie GC on the Isle of Arran
But he returned fit and well in May and highlighted his first full round back with his first ever hole-in-one at Dunbar’s third hole, where he’s also a member, before recently completing all of Scottish Golf’s affiliated courses in style at this year’s Open Championship venue, Royal Troon.
A regular caddy at Archerfield Links and other East Lothian courses and a course assessor for the magazine Golf World, McPherson has been delighted to raise over £4,000 for Cancer Research UK through the generosity of friends, golf clubs and fellow golfers.
McPherson, who teamed up with friends Craig Watson and Stuart Fleming for his journey and fund-raising efforts, said: “I’ve played 669 courses and I reckon there are 682 in total, but that includes pitch & putt’s, par-3 courses and unofficial courses on people’s private land not normally accessible.
“It’s been easy enough to use the lists produced by Scottish Golf and tourist bodies, but it’s been really difficult to find the more obscure private courses and we’ve had to rely on word of mouth as we’ve travelled around. Anything that constitutes a golf hole is within our target range.”
McPherson lists the likes of Kingsbarns, Turnberry Ailsa and the Old Course at St Andrews as his favourite venues on his golfing odyssey.
But the 11-handicapper has also been delighted to enjoy the challenge of countless other venues far off the tourist track, notably Traigh in the West Highlands and Stroma, an uninhabited island in the middle of the Pentland Firth where sheep keep the grass cut.
McPherson continues: “There are umpteen lovely little courses at the most unlikely places. The romance of playing a lovely wee hole in a remote part of Scotland and meeting different people makes it such a rich experience.  Our visit to Fair Isle to play the 6-hole Lighthouse Keeper’s Course was just epic and we sent some used balls, ladies clubs and Glen GC flags as a thank you.

Stroma GC, an island off the northern coast
“One of the best holes at Asta Golf Club on Shetland is 58 yards. That’s an officially recognised course with an official SSS so we decided that since holes on some pitch & putt and par-3 courses are far longer, we should include such places in our definition of a “golf course” in an effort to play absolutely every course.
“It’s been far from cheap going to places like Durness, Wick and the islands of Colonsay, Barra, Iona and Whalsay, but the journey highlighted the diversity of golf in Scotland, the beauty of our country and I had great fun on the way.”
McPherson, who has recently volunteered to become a course rater for Scottish Golf, added:  “I still have a few unofficial courses to play and since there are other courses around Scotland currently in planning or under construction, my journey isn’t quite finished!
“A few people have done this challenge before, and I know of others doing the same thing just now. It’s great to do it if your leisure time allows. It’s an unforgettable experience and it’s amazing the diversity of the courses you’ll play and the friendliness of the people you’ll meet.”
I'm often asked what my favourite courses are out of the 669 played so far.  It's difficult to pick out courses other than the obvious e.g. the Old Course, Turnberry, Kingsbarns etc. and perhaps a bit unfair to do so, since in many cases I've only played courses once (in all weathers!) during my travels.  Maybe I'll get round to writing about favourite experiences and particular holes rather than favourite courses.  But for now, my next course will probably be the 9 holer at Maverston GC, once it's a bit warmer!
Posted by Alan McPherson at 10:26 No comments: