When I started this blog in 2009,  I listed all of the 200+ courses that I'd already played, with the intention of writing only about those that I had yet to play  Nine years, too many lost golf balls, thousands of miles and a huge number of shots on 400+ golf courses later, and I've actually finished playing all of the 587 courses recognised by Scottish Golf plus many more unofficial courses.  A few folk have asked whether I have any plans to revisit and write about the "missing" 200+. The short answer to that is no.  However, as I'm now doing some work for a prominent golf magazine that involves playing our best courses (yes, I know, but someone's got to do it!), I will be revisiting some of those courses again.  Accordingly, I'll be adding to the blog as and when I'm playing these courses again (not forgetting the few unofficial courses that I've still got on my "to play" list. 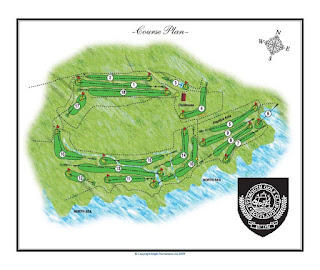 The first course that I've visited again is Eyemouth GC, an 18 hole gem sited on cliff tops on the east coast of Scotland, just 10 miles north of the border with England. Eyemouth was founded in 1894 as a 9 hole course but the construction of a new road to Eyemouth Harbour in 1997 created the opportunity for the course to be extended to 18 holes. Eyemouth has 3 main claims to fame.  It's the first course you'll pass on the way up the A1 road from England, it's 6th hole is recognised as the most extraordinary hole in Great Britain and its 13th is, at 656 Yards, the longest hole in Scotland. But it also has another claim to fame, namely that it's as welcoming a club as you'll find. At most clubs, the back tees are reserved for competition play, but here, visitors are invited to challenge themselves against the very back tees on these two special holes.  A refreshing change! 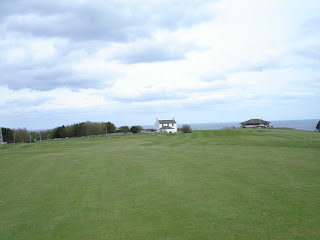 Anyway, I fronted up on 9 May 2018, on a cool, dry but increasingly windy day, when this little course was clearly ready to bare its teeth. The 1st hole is a straight 506 Yard Par 5, with a couple of blind shots over small hills.  Just take the mobile phone mast in the distance as your line and avoid hitting the guys on the 2nd tee, Alan!  That done, an easy par start.  The 424 Yard 2nd (as shown here) was the Stroke Index 2 hole but I was playing it downwind so that was another easy par. 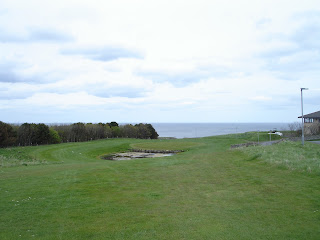 The redesign of the course has created some really good holes, this downhill 146 Yard Par 3 3rd being one of the best.  This would be a tricky hole, in full view of the clubhouse windows, but the addition of a pond in front of the green makes it really challenging. Long is better than short but very long, when the Greenkeeper was passing by, was just embarrassing.  A bogey 4 was OK.  The 4th is why you need to buy a Course Guide before playing. This is a 289 Yard Par, and Stroke Index 18. First time I played it shortly after the course had been extended, I (naturally) pulled out the driver.  I later found the ball when playing the 5th, on the other side of the road that now bisects the course.  Please note - the 4th is a dog leg that requires a 7 iron at most to stay short of bunkers that line the edge of the fairway, before the road takes over!  I played safe this time, but the increasing wind came into play, I was short with my second shot and another bogey was on the card.

The 5th is an easy looking slightly uphill and downwind Par 4, but there's a blind dip in front of the green, just to get you thinking.  By now you'll be anticipating the famous 6th, the most extraordinary hole in Great Britain.  But you've not gone all that way just to play off the Yellow Tee, have you?  No, you go out to the White tee and turn to look at the apparently massive gap in the cliff, with the sea a good hundred feet below, the wall of rock facing you, that sliver of grass and the top of the flag, just visible a formidably long way away.  You're glad that you're at the far end of the course, with no-one watching, until a couple of walkers stop to take in the spectacle.  You're maybe also wondering whether they've seen your first feeble effort with an old ball or whether you can brass it out, claiming you've done the impossible and are now going to play another ball from the easier yellow tee, just for the fun of it.  Please do not wimp out.  The 6th is one of those rare unforgettable holes that you just must play from the very back tee.  Club selection is key, as you obviously need enough to fly the gap, but the green is considerably higher than the tee and there's the wind....!  My 20 Degree Rescue did the job, just, but I was way left, over beside the next tee, so a bogey 4 was the best I could do.  Here are a couple of photos that give a flavour of this terrific hole. 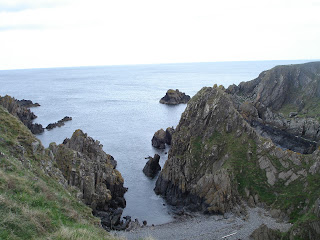 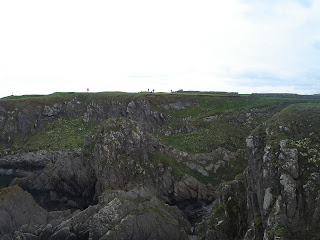 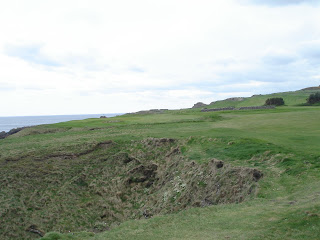 The 7th is a short 324 Yard Par 4, played slightly downhill into the prevailing wind, running along the side of the cliffs.  Club selection is vital off the tee, as a good long  drive runs the risk of running into a deep cleft in the cliff face or if slightly too far right, into a couple of nasty bunkers.  I was happy with my bogey after flirting with a sheer drop to the sea, far below, after a wayward drive. This was my view for the 2nd shot and a landmark photo in my travels.  I've been using a now battered and old Sony Cybershot 7.2 megapixel camera for just about all of my blog photos since 2009, but it's now jammed, with no signs of life, other than an invitation to turn it off and on again, which then repeats itself.  Looks as though it wasn't indestructible after all!

The next couple of holes start the trek inland and are short Par 4's, up then downhill.  I was out in 39, playing not too badly, but I knew from past Eyemouth rounds that the Back 9 would be more challenging, being almost exactly 400 yards longer, considerably more hilly and with some quirky greens.

The back 9 starts with a really good short Par 5, dog leg right.  A good drive is essential, to leave a second shot that must finish between the burn that crosses the fairway and the pond in front of the 2-tiered green.  It should be an easy enough hole with careful course management, but the wind caught my pitch to the green and blew it sideways left, so I had to settle for a bogey.  The 11th was my least favourite hole at Eyemouth.  At 279 Yards, this Par 4 might look innocuous in the Course Guide, but it's very steeply uphill into the prevailing wind, the green is only 21 yards deep and half of that is so steeply sloped from back down to front that a ball is very unlikely to hold unless it makes the top tier.  I'd hit a decent drive but still needed a 23 Degree Rescue to reach the green, only to see my ball run back down into one of the 3 bunkers defending the green.  This is a really tough hole, so be warned.  The slope on the 12th green is a bit like the 11th, so although this is a short 165 Yard Par 3, you must find the back of the green with your tee shot, played over a deep gulley.  The wind again came into play and I needed a my Driver to get there.

The 13th is Eyemouth's second signature hole an epic roller coaster Par 5, played downwind and downhill, with a water hazard running alongside the left of the fairway, culminating in a large pond in front of the green.  It's pretty meaty off the Yellow tee, at 590 Yards, but there was ample land behind and above the Yellow and White tees when the course was remodelled, so there's now a tiger tee at the highest point of the course, turning this into a 656 Yard monster. The longest hole in Scotland? I think so and if you ever play Eyemouth, be sure to take the walk and play this hole from the tiger tee, just for fun.  The  panoramic view from the tee is stunning and if you can nail your drive and the wind is helping, you'll be hitting one of your longest ever drives!  The second shot might be blind but the fairway was generously wide and left me with an unlikely chance of reaching the green in regulation, or laying up short of the pond.  I took the conservative approach and was happy enough with a 6.  A great hole! The 14th offers some relief and is an easy enough short Par 4, dog leg left, slightly uphill.  Easy enough if you find the right level on the 2-tier green, that is!  I just missed birdie after a good short iron approach. 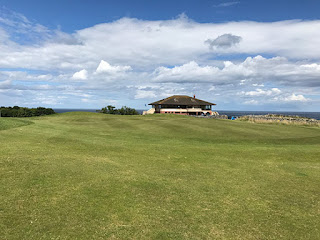 The 15th is the Stroke Index 1 hole and at 441 Yards, is the longest Par 4 at Eyemouth.   Another hole played uphill into the prevailing wind with a steeply sloping green and just to make it even trickier, a burn splitting the fairway that comes into play for your second shot.  I managed a 5 but in truth, I could probably play this hole many many times without getting a par.  The 16th should be relatively straightforward, but in the 6 or so times I've played this course, I don't remember ever getting a par.  The key is to position the tee shot at or beyond the corner of the dog leg, leaving a short iron to a plateau green, well defended by 3 deep bunkers.  I got the first bit right but found an awful lie in one of the bunkers with my second shot and trudged up the hill to the short 17th debating how I'd managed a double bogey!  The 17th is an inviting short Par 3, played over a small gulley, with banking behind the green to catch anything overhit.  An easy par and on to the last hole, a really good 530 Yard Par 5, played downwind.  Keep your drive to the left side of the fairway and be careful not to over hit your approach to the green, as seen here (a photo "borrowed" from an internet source).  I was nearer to the practice putting green after doing just that, hence my closing bogey!

I'd gone round in 84, net 74, with 32 putts.  The composite course I played was around 6300 Yards, Par 72, so a pretty good round in the circumstances.  I'd bogeyed both of the signature holes, but they'll both live long in the memory. It's a pity that Eyemouth doesn't get the huge visitor numbers it deserves, as it's great fun to play, even if your game isn't up to the challenge of some epic holes and sloping greens.  Do yourself a favour and give it a try, with a spare ball or 3 for your shots from the 6th back tee!

Posted by Alan McPherson at 11:43 No comments: