As I've said before in this Blog, it's been quite difficult to identify all of the courses we'd need to play in order to achieve our ambition of playing absolutely every course in Scotland. There's no single fully comprehensive list that includes all of the private courses, those with less than 9 holes and those that don't feature on any lists but still have "fixed tees and greens, for the purposes of playing golf" which is our basic definition of a "golf course."  If we'd wanted to restrict ourselves to just playing courses that have 9 or more holes, including at least one Par 4, it would have been easy enough to know where we needed to go. However, since some pitch and putt and practice courses have holes that are considerably longer than some that are found on "proper golf courses" we think it's necessary to try to play such courses.

It's difficult enough to get round the 600+ courses that have at least 9 holes, including at least one Par 4, so full respect to any who have succeeded in doing that. To any who prefer that narrower definition of a "golf course", please just allow us to be different.  Yes, we're probably absolutely daft, traipsing around Scotland in all weathers trying to play obscure pitch and putt etc. courses in remote parts of the country, but that's our chosen target. In reality, our ambition can only ever be to play every course we know about. OK, so maybe we'll miss a few that we never find out about.  If we do miss any, that'll be a shame, but equally, it's no big deal. We're simply doing our best for our chosen charity and enjoying the journey.

Last year Graeme, a buddy who is playing new courses in pursuit of his own golfing and charitable ambitions, gave us a list of pitch and putt courses that he'd found in internet research, some of which we thought might fit our own definition of a "golf course." Although websites might claim to have a "family 9 hole pitch and putt course" or similarly worded attraction, we've found that it's difficult to know without a site visit whether particular facilities meet our definition.

It's been a frustrating summer in terms of my own efforts to play new courses.  I've been pretty busy working at my own golf club in addition to caddying and taking holidays with Polly that whilst very enjoyable sometimes seemed like personal attempts to refloat various continental economies, but I digress.  Graeme had told us about a couple of courses in the far south west of Scotland that might need to be played, so I made the trip on 1-2 September 2015 to Dumfries & Galloway to play a couple of his suggestions.  My first stop was at the 3 Lochs Holiday Park, tucked away down a narrow single track road in deepest rural Dumfries & Galloway, a few miles west of Newton Stewart.  The park's website had mentioned a 9-hole Pitch and Putt course and after paying my £3.50 green fee, I found the course at the far end of the caravan park.  Since our definition of a golf course is that there must be fixed tees and greens, I was hoping to find a clearly laid out course.  Sadly, it was not to be. There were certainly 9 greens and flags and the fairways were also clearly identifiable, but I could only find 2 marked tees. To make it even more confusing, the flags did not appear to have been set in any particular order. On what I took to be the first hole, the flag was numbered 5 and the last hole was numbered 1.  Other flags didn't have numbers at all and as for the greens, the grass was so long that some of the holes were completely overgrown, making putting impossible.

Overall, this facility didn't meet our definition of a golf course, so 3 Lochs is now off our list of Scottish golf courses.  I "played" it without losing a golf ball - no mean feat, given the length of the rough, but I didn't really score on any of the "holes" since they were all overgrown. For what it's worth, here are some random photos of the 3 Lochs lay out. 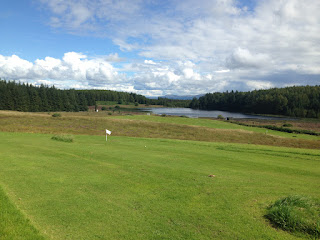 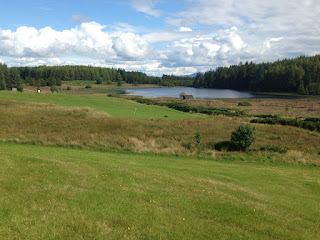 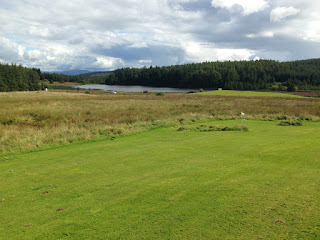 Note the use of heavy rough as hazards around the greens! The setting is pretty enough and with far more maintenance and basic investment in proper tees and flags, the owners could turn this field with flags into a genuine caravan park attraction.  As things stand, the place is better suited to dog walking (and that's what the only other people I met on the course were doing).

After that rather dismal experience, it was on to the nearby Wigtownshire County GC, a great little 18 hole links course hugging the shoreline at the top of Luce Bay.  This is one of a couple of courses that I'd only played with Polly in a foursome format, so it was good to play every shot this time.  My caddying this year has included area qualifying at Bruntsfield Links for The Open Championship, the Pro Am prior to the Scottish Open at Gullane and in the Scottish Seniors Open at Archerfield and I've also enjoyed playing at some prestigious courses in Scotland and abroad.  However, the greens at Wigtownshire County are definitely the best I've seen this year.  Fast, true and a joy to play.  The course is pretty flat and at only 5829 Yards off the Yellow tees, Par 70, it looks deceptively easy.  When I played it on 1 September 2015 the wind was generally helping on the Front 9 and birdies on the 1st and 8th holes meant I was 3 over par at the turn.  Holes 9-12 are particularly tight and difficult and when I turned into the wind for the last few holes, it was just a case of minimising the damage!  A gross 78 (net 68) was only possible thanks to some decent approach shots to the greens and some great putting.  I certainly don't remember making 7 successive single putts before, and 27 putts in total was pretty good too.  This little course is well worth playing and at only £30 a round, is great value for money.

From the sublime, back to the faintly ridiculous, I'm afraid.  I'd keyed the post code for the Seaward Caravan Park into my sat nav, since it had advertised itself as having a "9-Hole Family Pitch and Putt Course."  Sadly, the single track road I was on petered away into an overgrown muddy path, leading to a derelict-looking cottage with a single abandoned caravan.  Retracing my route, I followed road signs to the caravan park at Brighouse Bay, where I'd previously played its 18 hole links course and 9-hole pitch and putt course, but it was looking as though I'd have to search around for Seaward Caravan Park.  I eventually found it en route to Kirkcudbright, and after paying my £3 to the Warden, I also found its "Pitch and Putt Course." The Warden explained that some of the greenkeeping equipment was away being fixed, so I was fearing the worst.  Sure enough, the Seaward facility was almost on a par with that at 3 Lochs.  There were certainly 9 flags in a field and a few barely visible tee markers, one of which read "83 yards" without numbering the hole or suggesting a direction of play, so this is another that gets crossed off our list of courses.  I spent some time "playing" the course, but there was no clear sequence of holes and when I lost a ball played directly to one of the greens, I'd seen enough.

Hopefully, there will be better trips before my journey around Scotland's golf courses is complete.  Next stop is probably around Inverness, where Graeme tells me there are a few "possibles" to check out. There are also some pretty good courses up that way that I might play again e.g. Strathpeffer and Muir of Ord.