We'd just about enough time after our round on 1 November 2016 over Royal Troon's Old Course (and a leisurely lunch) to play the club's 9-Hole Craigend Course.  The Craigend measures 1539 Yards and is a par 29, with holes ranging from 67 to 290 Yards.  It had been used during The Open as a site for TV lorries, studios and general storage and in places the ground was still recovering, but it was still very playable, despite the dying light.

Graeme, Donald and I literally ran round the course in well under an hour, with our last hole being played as the sun set over the Old Course.  Here are some random photos of the course that hopefully will give readers an idea of the course. 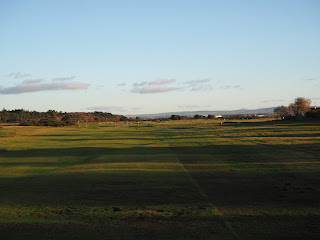 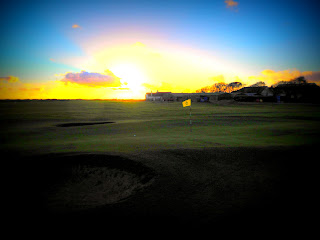 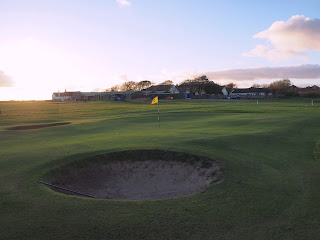 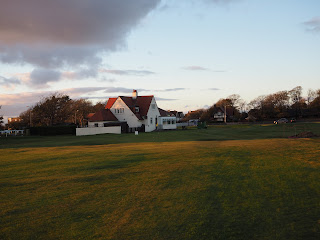 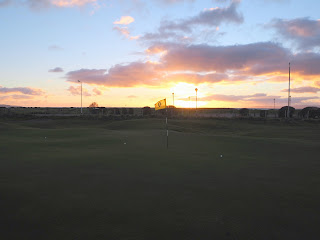 Craigend is normally only playable by members of Royal Troon so I'm grateful to Donald and indeed to the club, for the opportunity to play the course.  As might be suspected, Craigend is a good practice course for members as well as an ideal course for beginners and seniors wanting a casual short round of golf.  For the record, I went round in 34 shots, with 16 putts. We'd played the course just as the sun set but if we'd taken our time and lined up putts properly, etc. I suspect the score might have been no better, since we'd have finished the last 3 holes in the dark!

Our Craigend 9th Hole marked the end of a perfect day's golf.  The club couldn't have been more helpful and friendly, so a great big thanks goes to everyone we met and especially to Donald, for inviting us to play these courses.
Posted by Alan McPherson at 15:50 1 comment:

When I started my journey to play every golf course in Scotland, I didn't really know where it would end.  I was hoping that I'd finish in a blaze of glory, holing out on the 18th of one of our great links courses.  By the Autumn of 2016, I had 682 courses on my list, meaning I'd 15 to go, mainly small pitch and putt and Par 3 courses and only two 18 hole courses. It looked as though the Old Course at Troon, scene of 9 Open Championships, might be the final course on my journey but when the opportunity arose to play the Old Course on 1 November 2016, I jumped at the chance.  Royal Troon's 9-hole Craigend Course is normally only playable by members and their guests, so when Graeme, one of my buddies who is also playing every course said he knew a member who would get us on both courses, I had to go for it.

Regular readers of the blog will know that my progress was slowed down by a major heart operation in January 2016.  I was back playing golf regularly by May and managed to knock off a few new courses, but in early August I was back at the Doc's, this time diagnosed with Shingles, a nasty viral condition that at it's worst is unbearably painful.  Three months later and I'm still taking powerful painkillers every few hours, but the pain is under control and at last I can play (badly). Polly and I played a few courses in Cyprus in October 2016 to help me recuperate. A great place and still pretty hot, but we didn't think the courses there were a patch on those in places like Turkey and Ireland, so we won't be going back there golfing any time soon. 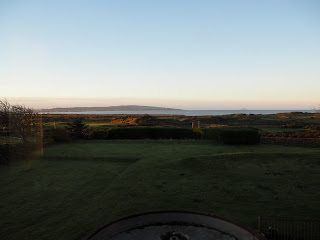 Anyway, 1 November 2016 was one of those rare Autumn days when the weather was absolutely perfect for golf.  Around 14 Degrees C, no cloud and only a very light wind.  We were due to play at 1000 hrs, but since Troon is 102 miles from our house, Polly and I decided to stay locally overnight rather than risk getting caught up in traffic en route.  This is the early morning view from our B&B, with the course laid out invitingly, just beyond the railway line that borders much of the back 9 of the course. All seemed set, but we'd chosen to visit on the 2nd day of the Greenkeeper's main Autumn programme to hollow tine and sand the greens.  So, a few of the holes had temporary greens, including the iconic 8th, the Postage Stamp.  We'd been really looking forward to testing ourselves on the course where just a few months before, Stenson and Mickelson had played what will surely go down as one of the greatest final rounds in any of golf's Majors. 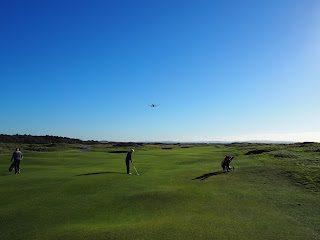 Graeme, Donald (the local member and Assistant Pro at one of Edinburgh's best clubs) and I opted for the Yellow tees, reducing the Old Course to 6170 Yards, Par 71 (with Polly  as our photographer and sole spectator).  A far cry from the Open crowds but there was another difference. Royal Troon sits on the flight path to Prestwick Airport and I don't recall seeing planes flying over the course every couple of minutes during the Open. This is me lining up a shot on the 3rd fairway, just after the latest Ryanair flight landing from goodness knows where had thundered over our heads! Quite entertaining in a way on the Front 9 but after the wind turned at the start of our Back 9, the planes were taking off rather than landing over our heads and the novelty soon wore off. 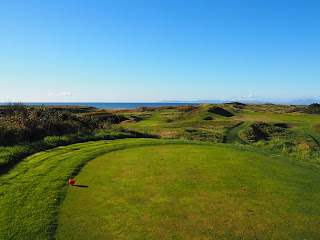 TV coverage of The Open had commented that the Front 9 was where to make your score, with the Back 9 where you held on as best you could. Our Front 9 was not as testing as we'd expected.  The holes looked completely different from the Open coverage. The rough had been cut back, the fairways were running slower and our main course management requirement was to stay out of the bunkers.  I 3-putted the 1st for a double bogey 6 but pars on the 5th, 6th and 7th meant I was 5 over after 7 holes. Not too bad after my recent health problems. In fact, I thought the first 6 holes were pretty straightforward from the Yellow Tees.  The 6th played to a modest 518 Yards, but is a really meaty 618 yards from the back tee. We'd been looking forward to playing the Postage Stamp 8th, the legendary 114 Yard Par 3 that is surely The Old Course's signature hole. Sadly, we had to play to a temporary green, in the middle of the above photo, with the heavily sanded green to the right.  The temporary green extended the hole by 40 yards and was a really small target, so we were grateful that it wasn't windy.

The 9th is a short Par 4 of only 375 Yards, wide as you like, requiring only a decent drive to set up an easy iron to a bunkerless green. There's a slight dog leg off the tee, but I misjudged the distance to the corner of the dog leg and had a poor lie in heavy rough.  A double bogey 6 there was disappointing, but I was out in 44 (with the same new ball). Passable, I suppose. 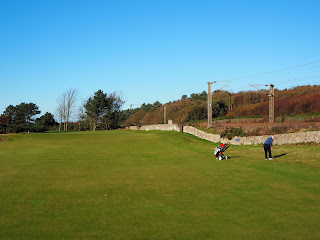 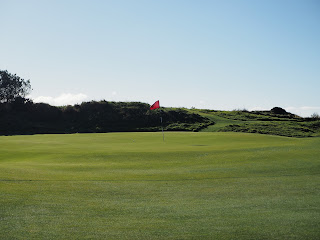 The 10th is slightly shorter than the 9th and is supposedly easier according to the Stroke Indexing, but it's slightly uphill and my single putt bogey was the best I could do. The drive is blind over gorse, so be careful!  "The Railway" 11th is the Stroke Index 1 hole and is always a demanding test at 483 Yards off the back tee, with a blind tee shot to a narrow fairway bordered with OOB to the right and gorse to the left.  From the Yellow tee, the 11th is a far less intimidating 357 Yards.  This is me playing my 3rd shot to the green.

The 12th is a 377 Yard Par 4.  I'd hit a decently straight drive and opted for a 7 iron punch to a heavily contoured 2-tier green. You know how you scuttle a ball along the ground and it runs forever? Yes, dead straight towards the flag, finishing 4 feet away, as shown here!  My big chance for a birdie at Royal Troon, duly holed. Go me! 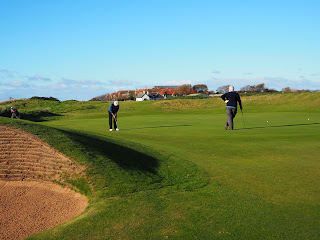 The last few holes at Royal Troon are more testing, even from the Yellows. The Par 5 16th is 50 Yards longer from the back tee, and looked easy enough at only 504 Yards, but I still managed to make double bogey without doing anything particularly daft, apart from finding a greenside bunker. This is me missing my first putt, with Graeme waiting his turn.  And so to the 17th, a tricky 167 Yard Par 3, played to a plateau green, well guarded by bunkers on both sides. I missed the green, with my tee shot finishing in light rough.  My rusty short game had held up reasonably well until now but I'd an awkward 20 yard chip over a steep slope to the elevated green.  My treble bogey could have been even worse and I'll clearly need to get some short game practice in! 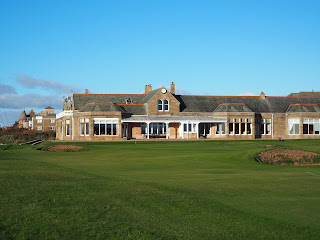 The 18th was a tough 464 Yards during the Open, but was a modest 344 Yards for us mere mortals.  I hooked a drive into heavy rough and could only move the ball to 60 Yards from the green, as shown here.  The course hadn't been busy, despite the excellent weather.  We'd seen a few guys teeing off in front of us before we teed off on the 1st but there was no sign of them looking out the clubhouse windows as we completed our round.  My main thought at the time was "just don't hit a window with your approach shot to the green".  I needn't have worried, as I hit a good pitch to within 10 feet.  I was just disappointed that I missed the par putt.  Still, a bogey on the last meant I'd stumbled around to a semi-respectable 90, net 79 (8 over net par) with 32 putts. 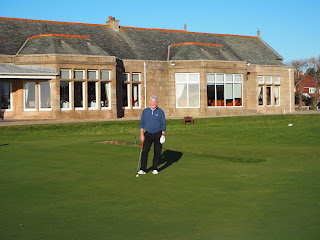 I'd like to play the course again sometime, but it's £230 for a round in high season and although Royal Troon's Old Course is great fun to play and a good test, I suspect I'd opt for The Old Course at St Andrews, given the choice. This is me, finishing my 668th course in Scotland.  Only a few out of the way Par 3 and pitch and putt courses left and one 18 Hole course at gWest near Gleneagles.  I'm playing at Gleneagles on 7 November 2016, so maybe I'll find a way to access gWest - if not, the search continues. I suspect there are a few small Par 3 or pitch and putt courses I don't know about but I won't lose sleep over them. After open heart surgery you tend to put things into perspective. Playing every Scottish course I know about is fun, but if I miss any I can still rest, knowing that there are more important things in life, starting with life itself.

A final comment on Royal Troon's Old Course.  If you get the chance to play here, make the time to visit the 19th, grab a seat by the windows and watch the world go by.  I guess I've eaten in hundreds of golf clubhouses across the world over the years but I'm sure I've never had the chance to order a cheese and haggis toastie. An unlikely combination, but absolutely delicious, washed down by a pint of cold lager.  I could have stayed for another beer, but we'd another course to play and precious little time before sunset.  If and when I play the Old Course again, I know what I'll be ordering when I get in.