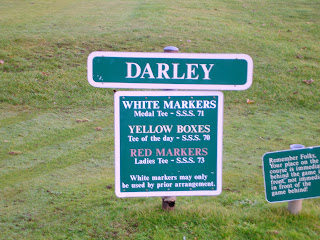 The small town of Troon lies at the heart of a fabulous strip of golfing country on the Ayrshire coast, from Irvine down to Turnberry (and I'm deliberately excluding the town of Stevenston, home to one of my least favourite Scottish courses - which I'll not name, since I don't think it's worth playing unless you're really desperate).  Troon of course is famous as the home of the excellent and formidable Open Championship course at Royal Troon GC but aside from that and the other 2 courses operated by Royal Troon GC, this little town also has three 18 Hole links courses, all owned and operated by the South Ayrshire Council i.e. Lochgreen, Fullerton and Darley.  I played Lochgreen in early 2010 (Course no 245) and the Fullerton Course in early 2011 (Course no 363).  My all-courses challenge buddies Craig and Stu managed to play all 3 on one day a while ago, their assessment being that Darley was by far the best and most difficult.  Indeed, Craig (who plays off 3 at Carnoustie, so knows what he's talking about) rated Darley as one of the most difficult courses he'd played that year so I was somewhat wary of the challenge that Darley would present to my 11 handicap game. The weather hadn't been great in the past month or so and although my caddying work has almost certainly finished for the year, I'd not played any new courses since the round over Glasgow Killermont.

28 November 2013 was predicted to be a sunny dry, mild and almost windless day so I got up early and set off on the 103 mile drive, hoping I'd manage respectability at worst.  Darley measures 6016 Yards, Par 71 from the Yellow tees.  The normal greens were in play (soft, hairy, slow and bumpy and very different from the medium paced smooth greens that are still prevalent on my own course and other local courses on the East Lothian coast).  However, winter tees were in operation, meaning the course length was nearer to 5900 Yards - and long enough, given the lack of run on soft fairways.  I'd arrived in time to see a large group of lady members lined up ready to play a pre-Christmas competition on the Fullerton Course, complete with Santa Claus hats and reindeer antlers (is it really that time already?) and although the Darley Course was almost as busy, a more ba-humbug attitude was evident.  I'm well-used to playing behind slow players by now, but the 3 in front managed to lose their place on the course to a 4-ball in front of them, by the 5th.  The bonus of their slow play was that I soon teamed up with David, another single player (and a local member), so at least I had excellent company while waiting for the group of front to play. 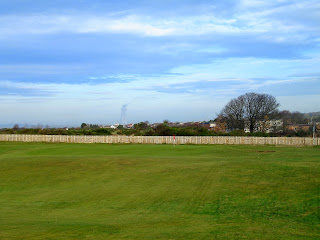 Darley is a fairly flat course and starts with a short Par 5 of only 486 Yards.  An easy opening par there and a single-putt par at the 2nd (this is a view of the 2nd green) and I was wondering what evils Darley had up its sleeve. I didn't have long to wait.  The Par 4 3rd is only 260 Yards but a deep ditch concealing a water hazard runs across the fairway,  the 3 guys in front had all been fishing around looking in vain for balls in the hazard, so I should have noticed that the shortest route across this ditch was to the right of the fairway.  Left isn't really very clever, as the carry over the ditch is quite demanding. I just about cleared the left side of the ditch but had a poor lie in heavy rough, hence my bogey 5. Caddies are supposed to be more conscious of the importance of course management, but I'm clearly out of practice already! 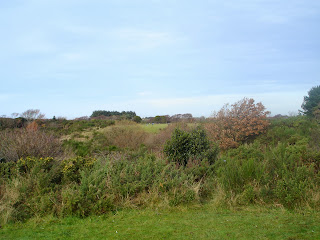 The 4th is a short Par 3 playing to 109 Yards from the tee, so an easy enough par there. The 5th is Stroke Index 1 and at 408 Yards, this Par 4 has the most difficult tee-shot on the course. This is the rather uninspiring view from the tee.  The carry over the gully is only 150 Yards or so, but  the bushes in front of the tee need some trimming so I was happy enough to find the fairway. I'd hit my drive up the right side of the fairway, a wise move since high bushes on the left side come into play for the second shot.  I'd hit a pretty good 3 Wood but a shocking first bounce took my ball into pine straw to the front right of the green, leaving me an awkward pitch to the flag, over a deep bunker.  I was happy enough with a 5 after clearing the bunker.  This is a view of the green from the middle of the fairway.  A good hole, though. 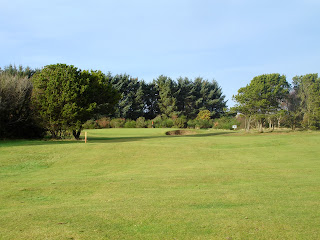 The 6th is a 535 Yard Par 5 and the longest on the course.  The fairway is generously wide and lightly bunkered, so there's really no excuse here.  The only real difficulty is that the green lies in a dip beyond a small hillock, meaning you won't see much of the flag.  Heavy gorse immediately behind the green will catch your eye (and anything over-hit) but this is a fairly easy hole, which I should have birdied after hitting my third to within a few feet of the hole.  Putting was just a lottery though and at least my first putt looked good in the air. 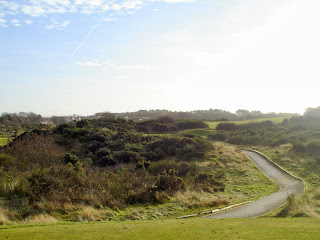 The next couple of holes are short Par 4's and reasonable birdie chances in normal conditions. I was only 10 feet or so away in 2 on the 7th and I hit a decent putt, but the green was pretty bumpy.  Still, I was only 2 over after 8 holes! This is the 9th, an awkward little 160 Yard Par 3. The green is partly hidden by gorse and a heathery bank short right.  For readers not familiar with heather, it's awful stuff.  You can see your ball and think you've a reasonable lie, but these little plants are tough as nails and making clean contact with your ball is hugely difficult.  I'd a severely downhill lie in the heathery bank short right of the green and did well to escape with a double bogey 5 to be out in 40 strokes, at 4 over par.  I'd have taken that position given Darley's reputation as a tough track, so I wasn't complaining on that score.  By this time the sun was  warming our backs and I was too hot in my long sleeve T-shirt and thermal lined trousers, but if only the 3-ball in front would speed up to a crawl!

The back 9 at Darley is slightly more tricky than the Front 9.  There's more gorse and heather to avoid and the fairways are narrower and more undulating. For example, the 10th is a straight 339 Yard Par 4, but the tee is elevated and the fairway cambers steeply to both sides so finding the fairway at all is difficult.  I'd hit a good drive up the left of centre but my ball finished in the rough to the right of the fairway on a steep upslope.  The plateau green was difficult to find from there, so I was pretty chuffed to make par after over-hitting my first putt 10 feet past the hole. The Par 4 11th is also quite tricky, at 404 Yards, slightly uphill to another plateau green. The 12th offers some respite, being a 144 Yard Par 3, again slightly uphill and with a green that's deeper than it looks.  The toughest hole on the course is the 13th, a 446 Yard Par 4.  A ditch and water hazard cuts across the fairway at about 260 Yards from the tee, but I'd no chance of reaching that off the tee.  Realistically, I'd no chance of getting on in 2, and my 3 Wood up the left side took a bad bounce into heather and was lost.  An ugly 7 at this, the Stroke Index 2 hole, was poor. 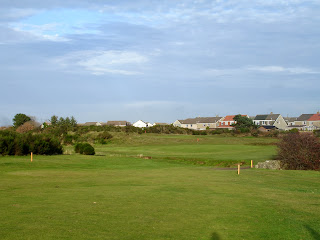 By this time, the 3-ball in front had really slowed down, but why they thought it necessary to wait until the green had cleared before teeing off on the 14th escaped both of us. The 14th, as shown here, is all of 377 Yards and with little run on the fairway the carry necessary would have been over 370 Yards!  I'd eventually hit a good drive and an 8 iron over a water hazard to reach the green, on an upslope beyond the hazard.  My 3-putt from there was disappointing, but I'd have my "revenge" on the greens later in the round. Meanwhile, David had an awkward hanging lie in heather and his 3 Wood was more than a little ambitious, but at least his shot from there would have alerted the 3-ball in front to our presence, since it landed pretty close to the 15th tee (and 40 yards right of the target line to the 14th green).  Indeed, David's wayward shot seemed to have the desired effect and we managed to play the last 4 holes without waiting around - just as well as daylight was fast running out. 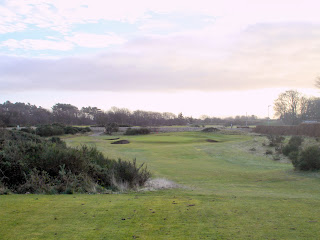 The 15th is a 335 Yard Par 4 but there's a deep gully in front of the green and anything remotely under-hit will leave you an almost blind shot of 40 yards or so, steeply uphill to the green.  I bogeyed the hole after under-hitting a short iron to the green.  In fairness, my second shot was made more tricky by the low sun.  I was 10 over par with 3 holes to go, so I needed a decent finish if I was to beat net par.  This is the 16th, a slightly downhill 140 Yard Par 3.  I mis-hit my 7 iron and was still slightly short of the green and my pitch from there ran a disappointing 10 feet past the hole.  My single putt from there was surprising since anything around that range or over was just a lottery on these greens.  The 17th is a decent 350 Yard Par 4 and again, I was slightly short.  My pitch ended 15 feet short but another fluky putt saved par.

I needed a par at the 18th, a 464 Yard Par 5, for a net 70, one shot inside the course par of 71. I'd hit a reasonable drive up the right directly into the setting sun and into some light rough, but a poor 3 Wood from there into heavier rough was followed by a couple of equally poor pitches.  I was on the green in 4, around 20 feet away (a distance that get's longer every time I think about it!) but again, my putter came to the rescue.  I'd gone round in 81, net 70, with 31 putts.  Darley is a really stiff test and well worth a visit.  OK, it's not in the same league as the Royal Troon GC courses, but at £1 a hole for the green fee, it's a real bargain.  Play to your handicap here and you'll have played pretty well. 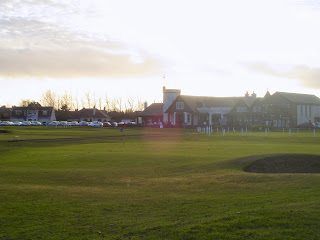 Posted by Alan McPherson at 19:23 No comments: