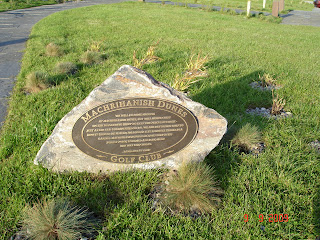 This is from the new course at Machrihanish, which promises to be a superb addition to Scotland's many links courses. I played it on 9 September, in glorious sunny weather, well worth the £60 green fee! 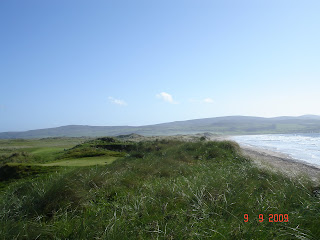 The first challenge is finding the course itself. Uniquely in my experience, the first tee is over 3 miles from the Pro Shop! I'd turned up around 45 minutes early to book in at the Pro Shop. A great welcome, but after a 5 hour drive to get there, I wasn't really anticipating going back 2 miles, turning down a single track road, going past Campbeltown Airport, going on past the old RAF base, turning off down a farm road, going through a farm yard, over the cattle grid and down another single track road to get to the Starter's building. By the time I got there, I was neat for timing, but the welcome was pretty memorable. I'd arrived just as the course manager, starter and others in the management team were having lunch. I'd brought my own, but it was insisted that I join them. An hour or so later, after a fascinating chat about the history and development of the course, I was given a free bag tag and course guide and escorted up to the first tee. I'd asked for directions, but was slightly taken aback by the suggestion that I follow 2 sheep dawdling along with no great purpose over a hillock. By now, it was obvious that signage was on the modest side, and with 5 separate tees to choose from, finding my way about was to be a real challenge. I'd also made a big mistake by taking my full bag on a pull trolley. Because the course is built on a Site of Special Scientific Interest and is so new that pathways have not been fully trodden down yet, so getting to tees and from there to fairways was pretty interesting at times!

The course design is simply outstanding, with only 7 acres or so disturbed to create the tees and greens, with fairways simply mown out of the natural folds of the dunes. I was hooked on this course from the first hole, a 366 yard par 4 from an elevated tee, straight into the wind, with the Atlantic in the far distance. A downhill iron to the green finished just short, but I managed a 4 despite the most undulating green I'd seen in a long time. Indeed, I spent a few minutes putting from various positions up and down slopes and across great swathes of the finest quality turf I'd seen on any new course. The cut was quite long, but my ball rolled true and fast. There was a skylark aloft and the crashing of the sea a few yards away over a huge dune, but other than that, not a sound. Heaven after 10 minutes! Another thing I noticed was that the course was almost deserted. Over lunch, the Course Manager commented that although business had been encouraging, the course was a bit quiet that day. I counted 10 other souls, but 2 of them were caddies so the experience was a bit surreal, as I was bursting to tell somebody how much fun I was having.

I guess that some of the holes will be tweaked a bit as the course settles down, but I hope they don't change the 8th, a real test. I'd played the Dunes off the White tees, so had a daunting blind drive over a dune followed by what looked like an impossibly long uphill second to a green fronted by huge evil looking bunker, of the magnetic kind! Needless to say, that's where my ball went, but thank goodness I'd cleared the hidden swamp tucked below a huge fold in the fairway. Two attempts to get out of the bunker 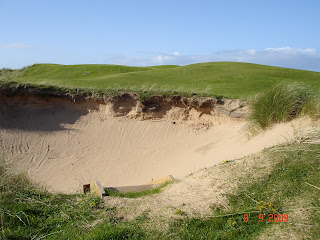 and a lucky long putt later, I'd escaped with a 5, but I shudder to think what this fearsome hole could be like on a really windy day. By contrast, I think the 9th is bit too severe. After a decent drive down the right, I had a 7 wood uphill blind shot of around 180 yards. I'd no idea what the line was but hit it plumb where I'd aimed. No idea where it went from there, but as the fairway petered out some 50 yards short of the green into a mixture of deep bunkering and rough, I was reduced to hoping that I'd at least found a bunker. Not so, hence the (eventual!) 9 on the scorecard. I think that the approach to the 9th green needs to be opened out with closer mowing, making it more playable for hackers like me! I'd also suggest changing the existing putting green into a par 3 as a 19th hole, to add even more quirkiness to the course and allow maintenance or any future changes to be made without an impact on the course. The European Club in Ireland has 20 holes (the space is there, so why not, was the explanation!) and as the Dunes course has ample land available, why not there too?

I usually pack a camera in my golf bag when playing a new course, but seldom have I taken over 30 photos. The views to sea are simply stunning, in stark contrast to the rather forbidding and bleak views of the closed air force base inland. I really hope that this development succeeds. I was told that there are great plans to expand the facilities, but for me, the Dunes course is already a real gem. I actually prefer it to the long-established but over-hyped Machrihanish Golf Club nearby.

I'd played that course a few years a ago on a dreich November afternoon, when even the seagulls were grounded and no amount of clothing was likely to keep out the damp and cold. I'd been down at Campbeltown on business and had only that afternoon to spare. There were 2 cars in the car park, mine and the Professional's. I'd been hoping for a quick start as I'd a long drive home to tackle, but was told that I'd need to wait just in case a member turned up. Indeed, just as I received that bad news, a single car emerged through the gloom a mile or so away, which the Pro took to justify his caution. Some 15 minutes later, 2 elderly members dragged themselves wearily up to the first tee and promptly invited me to play through, but the Pro was having none of that, encouraging Methusela and his pal to play away. By this time, I was regretting my decision to donate anything to the club's coffers, but I held my tongue.

As you may know, Machrihanish is famous for its first hole, and the drive over the Atlantic. The tide was out, but I did manage to find a puddle on the beach, which was either rain or ocean. Methusela and his pal let me through on the second and with nobody else in sight, I decided to see just how quickly I could play the course. There were some great holes and tricky lies out there, but for me, the course seemed to just dribble away, with the last 2 holes being pretty forgettable. A pity, since a course of that quality needed a truly great finish.

What really made my day was finishing the round in something well under 3 hours and meeting the Pro, locking up his shop. I'm not sure he saw the intended irony in my remark that the two-ball in front were probably now reaching the turn, but it kept me smiling for a while. I think I warmed up somewhere east of Inveraray.

I'd somehow managed to get round the Dunes in 91, with only one lost ball (Titleist 4 with a single black dot). I hope that whoever finds it gets to play with it for longer than I did and takes equal pleasure from playing this superb new course. I'll go back to Machrihanish one day to play the Dunes again and will try to beat that 91, but I think I'll give its more illustrious neighbour a miss. 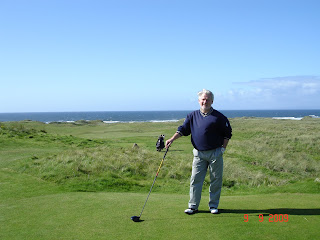