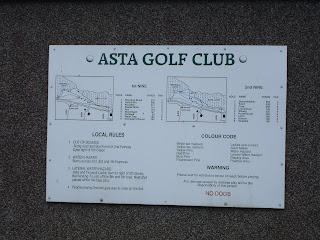 Although it was initially confusing, the more we thought about it the more we understood why 2 separate courses were inter-changed.  It simply provides more variety and rests parts of the course (although when we visited we had the 2 courses entirely to ourselves).  We've not experienced such an imaginative use of a course before.  We know that the Old Course at St Andrews is played backwards for a short while each Winter, but nowhere have we seen such frequent switching of tees and greens to provide separate courses.  Can any readers please say in the Comments Box below whether they've seen this before? - it's a new one on us.

The Ist Nine Course had yellow tee markers with direction indicators and the 2nd Nine had white markers and indicators and the score cards had excellent maps, much like those on the above sign, so it was easy enough to plot our way around.  Although the Ist Nine course was in play, we agreed that it would be too expensive to come back to Asta to play the 2nd Nine Course.  Instead and since the 2nd Nine Course markers were in place and we found some 2nd Nine scorecards, we simply played the 2nd Nine after our round over the 1st Nine course.  Well, at least Craig and Stu did.  I was in dire need of food by the time we'd finished the Ist Nine, so I sat it out before taking the guys down to the airport for lunch and their flight to Aberdeen.  Hot food, indeed anything edible was urgently needed so we all opted for Scottish Fusion at its best i.e. bacon, sausages, chips (French Fries) and chilli beef, washed down by some sugar and caffeine laden energy drinks.  The guys had played both Asta courses, but I still had some time to kill before my overnight ferry, so with renewed energy I went back up to Asta (still deserted) and played the 2nd Nine in little over an hour. 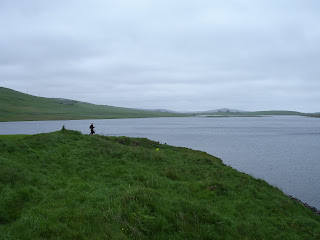 Both Asta courses are short, pretty flat and have completely different turf to the Shetland GC course at Dale, with lush parkland turf that was far easier on the feet than the boggy conditions we'd ploughed our way through earlier in the day.  Both lie in a fertile valley on the shores of the Tingwall and Asta Lochs.   The 1st Nine course is a mere 2023 yards, par 31, with 6 Par 3's, 2 Par 4's and a solitary par 5.  This course starts with a slightly downhill 214 yard par 3.  I'd hit an easy 3 wood to the side of the green for an opening par.  Next was a short 480 yard Par 5 followed by a 317 yard par 4, both of which I bogeyed.  Then came a run of 5 successive Par 3's hugging the shores of the Asta and Tingwall lochs, ranging from 58 to 197 yards. 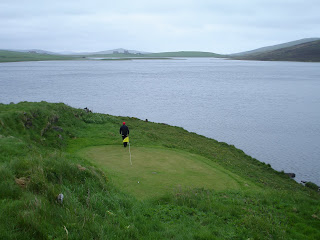 Yes, 58!  As shown above, this is the bizarre 7th hole, with Stu doing his ball-spotting.  With only the top of the flag showing and the Tingwall Loch dominating the scene, it's difficult to get a feel for distance.  Added to that, the tiny green is set in a hollow, slopes steeply from back to front and towards the water and is well protected by very heavy rough.  I'd played a soft lob wedge to the back of the green.  Craig had somehow managed to hold the green, but if memory serves, he missed his short uphill putt for birdie.  Stu lost his ball, but who needs long Par 3's when really short holes like this provide such novelty.  I really do despair when I see courses with every Par 3 measuring 190-250 yards.  That's fine for the professionals, but for courses that are only likely to be played by club members and visitors, most of whom will have medium to high handicaps, I do wish that designers would throw in the odd novelty hole, such as the 7th on Asta Ist Nine.   On a trip where I played 90 holes on 6 courses over 4 days, this 58 yarder was definitely one of the most memorable and enjoyable holes, so well done to whoever had the imagination to design such a (literally!) hidden gem. 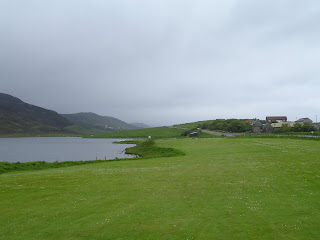 I was round Asta 1st Nine in 36, or 5 over net par, with 13 putts.  The 2nd Nine course is slightly longer than the 1st Nine, at 2320 yards, Par 32, with 4 par 3's and 5 par 4s. I only had an hour or so to spare before I needed to get to the ferry terminal so it was a relief to see that there was still no-one else on the course.  That would have been a real problem, since if anyone else had been there, they would have been playing the 1st Nine layout.  In fact, I'd probably have needed to come back another day, after the 16th, that is!  Anyway, I was playing as fast as I could and I think I played the Par 3 2nd OK, to a spare green with no flag on it by the shore of the Tingwall Loch.  At least that was the only green around 209 yards from the tee, so hopefully I got it right.  My tiredness was by then beginning to return, not helped by a slight feeling of deja vu on this the 5th, which had been the 2nd on the 1st Nine. 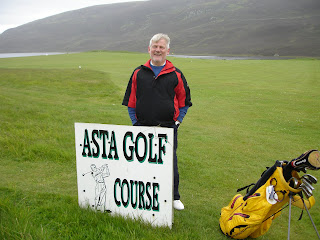 I was happy enough with Pars at 3, 4 and 9 for a total of 39, with 15 putts in just over an hour.  I felt and probably looked pretty knackered by then and time was pressing.  Indeed, by the time I finished I should already have been in the queue for loading onto the ferry, so it was a rush to make it in time.  However, if I looked the way I felt an end of round photo would have been even worse than this one taken by Craig after my earlier round over the 1st Nine course.

Ideally, I'd like to play both of the Asta courses again as both layouts are great fun and easy walking (unless like us you've had little sleep for several days and trudged your way around the course at Dale beforehand).  If there is a next time, maybe by then I'll have found out what some of the Asta hole names mean, such as

I'd also play Whalsay again, but with so many courses nearer to home and the costs of getting there, I suspect that I might not play either again.  However, if you should ever find yourself near Asta GC with an hour or so to spare, just hire some clubs (the clubhouse was open all 3 times I visited the course) and enjoy yourself, as we did and don't miss the 7th on the 1st Nine, a great little hole.
Posted by Alan McPherson at 19:23