I'd still to play lots of courses in the Aberdeenshire area, so Polly and I rented a cottage near the ruins of Tolquohon Castle just south of the village of Tarves for the week 7-14 July 2012, with the intention of playing 10 more courses.  That was the plan anyway, but the wet Summer we're having was threatening to spoil things.  Indeed, when we got to the Edinburgh Bypass on the morning of the 7th, the road was badly flooded, with the water up to the axles of my 4x4 and posing a real problem for Polly in her smaller car.  The road was closed shortly afterwards.  We'd planned to play at Westhill GC near Aberdeen, but it was still chucking it down when we got there, it was a very hilly looking course and we decided to save our energies for the testing week ahead.  Accordingly, our first new course on 8 July 2012 was Fyvie, a 9 hole parkland pay as you play course near the village of Fyvie in rural Aberdeenshire.  The course had opened in 2003, built by its enterprising owner on former farming land and is currently being extended to 12 holes.  The timetable for completion is uncertain, but I'll happily return there to play the new holes once the extended course is open. 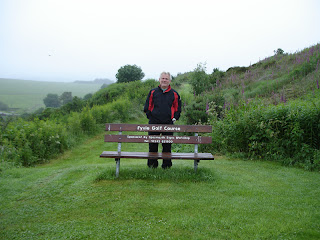 We both really liked the Fyvie course despite the rain, mist and general gloom of a sodden Sunday morning.  The course is around 2830 Yards, Par 35 off the Men's White tees and is moderately hilly, requiring pin point accuracy on some holes.  For example, the 1st is a flat 302 yard Par 4, but with heavy and soaking wet rough on both sides, your only option is to find the narrow fairway with your drive.  The course was pretty lush due to the weeks of the seemingly incessant rain that's been the Scottish Summer so far, so the fairways were very slow and holding, with grass cuttings adding to the difficulty.  The greens were pretty small and slow, as might be expected after such rain, but aside from their pace, were pretty good.  We didn't notice at the time, but drainage here was really good, with the course in remarkably better condition than some that I'd play later in the week.  This is me on the 1st tee ready for the next round in the annual competition with Polly for our Summer Golf Trophy, with the scores tied at 3 matches each after our earlier rounds at courses in Vilamoura and Dumfries and Galloway. 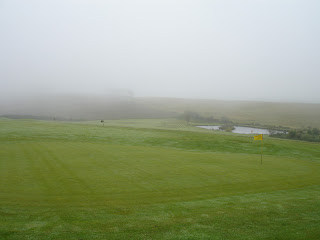 The 2nd hole is a slightly uphill 246 Yard Par 4, with the fairway sloping down from left to right.  The second shot is longer than you might think!  The 3rd is a really tricky dog leg right 298 Yard Par 4, named "Splash" which should give you a clue, as a large pond awaits any drive slightly right of the marker pole.  The tee shot is played blind over a small hill and you don't see the pond from the tee, so be warned.  The 4th is a steeply uphill 183 Yard Par 3 which also plays far longer than it looks.  By the time we'd got there, the mist had really closed in and although publicity for the course refers to outstanding views of the surrounding countryside, we were lucky to be able to guess the location of the green.  This is a misty view of the 4th green, with the 3rd hole just visible in the background. 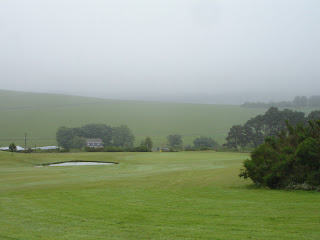 The 5th is the Stroke Index 1 hole, a 339 Yard Par 4.  I'd hooked my drive into heavy rough and lost my ball, running up a treble bogey in the process.  The 6th had recently been lengthened to something like 235 Yards, but was still, we thought, a Par 3.  The hole is slightly uphill, with an awkward 2 tier green.  I had a comfortable 4, but by then my score was level 5s, not what I'd hoped for on such a short course.  I'm often asked to comment on my favourite course in Scotland and it's easy to think about Castle Stuart and Kingsbarns etc. However, even on the most unheralded courses there's usually one hole that stands out as a really good well-designed test.  The 7th  is easily the best hole at Fyvie and one of the most memorable holes we played during our Aberdeenshire week.  This is a dog leg right 475 Yard Par 5,requiring an accurate drive avoiding OOB to the right and a hillock to the left of the fairway.  I'd hit a good drive right over the marker pole and a rescue club just past the dog leg corner.  From there, it's a 150 yards steeply downhill to a small green protected by a pond to the left of the green.  A bunker to the front right of the green would really tighten this hole, but maybe that's just me being too clever after finding the fringe of the green just 10 feet short of the hole with my 27 Degree Rescue third shot. I missed the birdie putt, but this is a really good hole. 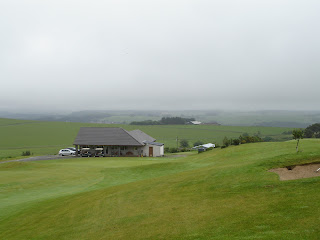 I'm less sure about the 8th, a really tough uphill 425 Yard Par 4, which is considered one of the easier holes according to the Stroke Index.  The fairway is pretty wide off the tee, but narrows considerably towards the green, bringing heavy rough on the left into play for your approach shot.  That's where I lost my second ball, en route to an ugly 7.  Maybe this hole plays easier in dry conditions, but when we played it this was probably the toughest hole on the course.  The 9th is a fine slightly downhill 314 Yard Par 4, finishing as all closing holes should, right in front of the clubhouse windows. I'd hit a good drive and had only an easy 8 iron to the green, but regular readers of this blog will know that I'm occasionally prone to the odd sh--- so this is a sideways look at the 9th fairway and the clubhouse after "one of those."  That error led to a closing bogey and a poor 47 in total, with 14 putts, well adrift of my ambitions for the round.  Not surprisingly, Polly took the honours and surged into a half-point lead in our annual trophy contest.

Fyvie is a really good little course, well worth searching out.  Craig and Stu have yet to play here and I'm looking forward to joining them for another go at Fyvie, probably once the new holes have been added.