This is an 18 Hole parkland course in the centre of Perth, operated by Perth and Kinross Council.  Whether or not any of the present holes can lay claim to be the earliest recognisable golf course, the North Inch was certainly amongst the first locations at which the game was played. This is confirmed by royal enactments in 1450. King Robert II forbade the playing of golf on the Inches, urging people instead to practice archery in preparation for an invasion from south of the border.  Relations with our English neighbours have improved since then, but I'll resist the temptation to comment further, given the current preparations for a referendum next year on Scottish independence.  This is a blog about golf, after all. 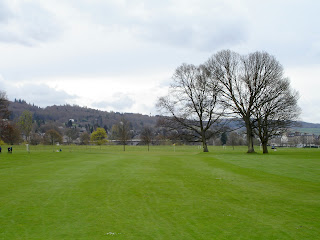 The current North Inch course is laid out along the banks of the River Tay and is pretty flat and low-lying, making parts of the course prone to flooding.  Indeed, when I'd turned up 18 months or so ago to play here, half of the course was closed and the other section had temporary greens and tees, so I gave it a miss.  When I finally played here on 2 May 2013 the course conditions were pretty good overall, though there were still signs of flooding and water damage on some fairways and greens.  The course is short at 5154 Yards, Par 68 off the Yellow Tees and is relatively trouble-free if you're careful, offering encouragement to beginners and higher handicappers, but there's ample trouble on some holes if you get careless.  For example, the 2nd is a slight dog leg Par 4, but with this pin position I should have favoured the left side of the fairway, since my second shot was almost stymied by a large tree.  In mitigation, the local pro was giving a group golf lesson near the 3rd tee and I was trying to stay clear - that's my excuse anyway.  I'd opened with 3 bogey 5s on the first 3 holes, measuring 372, 356 and 445 Yards, but I needn't have worried, as the rest of the Front 9 was pretty straightforward. 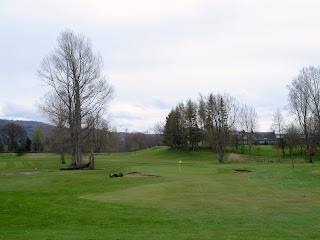 Indeed, the Front 9 measures a very modest 2418 Yards overall, ending with this, an 89 Yard Par 3.  I'd chipped an easy wedge pin high left but I'd not noticed that the contours of that part of the green feed down to the bunker - careless again.  It's easy enough to hit the green on this short hole, but it's also important to find the right part of the green - a more difficult challenge, for me at least.  A decent sand escape to 6 feet set up the par putt, but this particular green (and a few others) was heavily sanded, so I was really pleased to get the par.  I'd parred Holes 4-9 to go out in a very respectable 36. 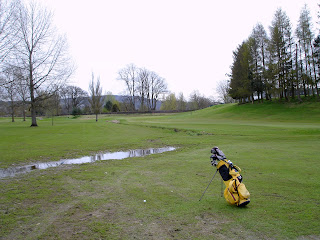 The 11th, a 343 Yard Par 4 (411 Yards from the Medal Tee) is the Stroke Index 1 Hole at North Inch.  You need a good long and straight drive to the corner of the 90 degree right dog leg to set up a medium iron to the green.  I got the drive OK, but I should have moved my ball as it finished in a pretty muddy and bare lie.  I was hitting the ball pretty flush, so what could go wrong?  I topped a 6 iron, narrowly missing a stream which cuts across the fairway, another careless mistake that cost me a bogey.  Indeed, I bogeyed the first 4 holes on the Back 9.  Some semblance of order was restored on the 201 Yard Par 3 14th.  I'd missed the green long and left with my 3 Wood, but a chip to within 2 feet ended the bogey run. 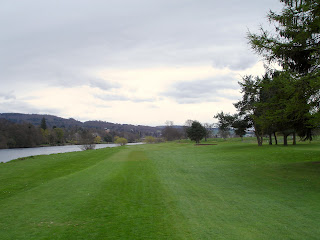 And so to the best couple of holes on the course.  The 15th, as shown here, is a challenging 366 Yards Par 4, which I played into a stiffening breeze.  Anything left or hooked is swimming or disturbing the anglers on the riverbank.  I've never understood the attractions of fishing, standing around for hour after hour hoping to catch something that in all probability you throw back anyway.  When the dreaded Scottish midges are in season, I prefer to keep walking, offering at least a moving target. I'd  deliberately hit my drive over the fairway bunker, leaving myself 150 Yards or so, over a tree.  I just needed to clear a greenside bunker by a few yards in order to run onto the green.  However, I finished half-plugged in the steep face of the bunker and was lucky to scramble a bogey.
This is the 16th, a 79 (yes, 79!) Yard Par 3.  You don't need anything fancy, just don't go left or short and don't 3 putt.  You'll also probably have an audience, as there's a walkway through the course to the right of the holes that's very popular with joggers, folks walking their dogs etc.  This being Scotland, a good percentage of your audience will either golf themselves or know a good shot from a bad one, so just try to look as though you know what you're doing.  I hit the green OK and managed to avoid 3-putting. 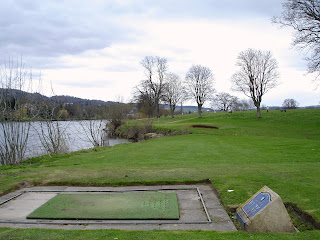 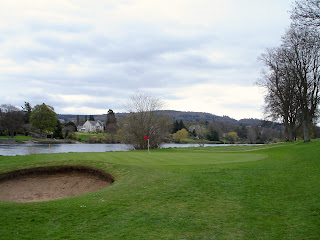 You might also have a gallery watching you drive on the 17th, a 280 Yard Par 4 that's really easy if you hit a straight drive.  Go right or left and you risk being blocked out by trees.  The last at North Inch is a 490 Yard Par 5.  I'd hit my drive into trees between the 18th and 3rd fairways, but I'd a clear sight of the 3rd tee and from just short of that, I had only a short wedge to the 18th green.  However, I missed the green on the left side and needed a good chip and a single putt to rescue my closing par.  I'd gone round in 76 gross, net 65, with 29 Putts.  Three under net par is pretty reasonable, but then again, this isn't the most difficult Par 68 I've played and with fewer careless shots, I might have scored even better.  The course didn't look at its very best after the Winter just gone, but it was still an enjoyable walk.
Posted by Alan McPherson at 18:37