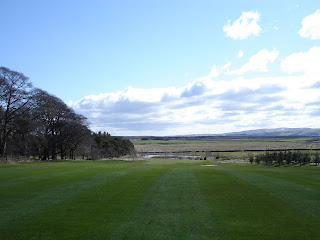 I played this excellent parkland/moorland course on 21 April 2010, a cold and sunny day with a strong northerly wind. Rutherford Castle is a relatively new course, but it has recently been bought by a major property developer and in addition to some large houses already under construction, a major luxury hotel is planned. Indeed, I was advised by a couple of members in the car park that the course was about to close for a couple of years to enable the hotel to be built. They and other members were currently considering options to join other clubs. Although there was cold wind blowing, I'd expected the course to be busier and apart from those 2 members and a greenkeeper (doing a great job, as the course was in super condition), the only other people I saw were a couple of guys teeing off at the first as I finished my round. I thought that this was a seriously good and interesting course, so it was disappointing that for whatever reasons, the course was almost deserted. Accordingly, there were no witnesses to one of the steadier rounds I've played recently. Rutherford Castle is a par 72 of 6199 yards off the yellow tees and has some really goods holes. After a quiet start with an easy par 4 and a modest par 3, the course opens out and the 3rd hole is a downhill par 5 of 479 yards, with a generously wide fairway. A good drive, solid 3 wood and a short pitch to 15 feet was followed by a single putt for (of late!) a rare birdie. Here's the view from the fairway. 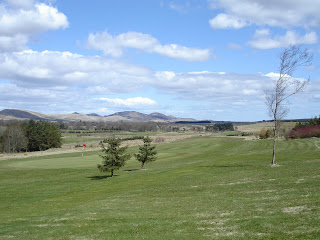 Rutherford Castle already has the flavour of a good resort course. Modern design, water, wide fairways, excellent greens, interesting holes and great views of the Pentland Hills and surrounding countryside. I don't know whether the hotel construction will take land from the course and require some redesign. There is certainly enough spare land in the middle of the course if that proved to be necessary, but I hope the developers can leave the course relatively untouched, as it's a pretty good test already. It is, however, very exposed to the elements and is likely to be wet under foot and prone to frost damage (if not snow-covered) in the winter months. This is a view back down the 11th, an uphill par 5 of 509 yards, with a hidden bunker (as I found!) in front of the green. That cost me a bogey, but there's a nice bench beside the next tee and that seemed a good spot for my packed lunch! I certainly can't imagine that the bench takes much traffic, since at the time I was the only golfer on the course (the other 2 having done only 9 holes).

Water comes into play on several holes, not least the 383 yard 14th. Although the fairway is generously wide, the northerly wind pushed anything remotely wayward into a water hazard on the right. I know this since that's where my drive ended up, but another single putt meant I'd only dropped one shot. The 15th was even more tricky. The greenkeeper was cutting the fairway so I baled out to the left into the short semi-rough. A wiser choice would have been to go right, since I'd left myself stymied by trees. Even my pitch back to the middle of the fairway, avoiding the greenkeeper once again, left me with a stream crossing (twice!) in front of the green. I limped off with my second double bogey of the round (the other being at the very difficult 4th hole, an uphill 398 yard par 4 played straight into the wind).

Rutherford Castle finishes with a couple of good par 4s, with the last finishing in front of the clubhouse still being built. Here's a view up the last fairway. 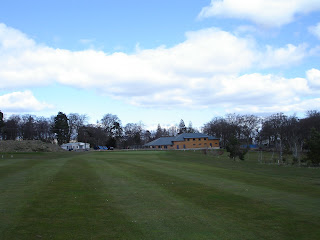 Perhaps I'm wrong, but the building's design does not appear to offer very good views of the course. Maybe I'll get back to find out one day. I went round the course in 83, net 72, so not bad. I'd taken only 29 putts so there were still a few unforced errors from tee to green, but thankfully nothing on the scale of recent rounds.
Posted by Alan McPherson at 10:26