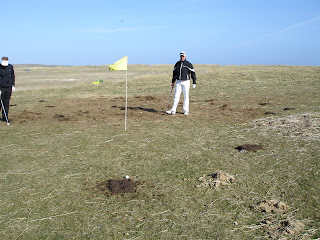 It's difficult to know where to start, but in summary, this was one of the most enjoyable and fulfilling rounds of golf any of us could remember. Solles does not feature on any of the conventional lists of Scottish golf courses and we only discovered its existence after extensive Internet research and a reference to "an 'unofficial' course at Solles on the west coast of North Uist, which has been set up by the local community and is a 9-hole course. It is open to the public, but opening is seasonal as it is on common grazing land - so please check first." After some difficulty we tracked down Angus Johnston, a local man who agreed to meet us at the Solles Co-op to show us where the course was. As an indication of how obscure this course really is, the Co-op shop assistant we asked said she didn't think there was a course locally - and Solles is a tiny community. Angus took one look at my Honda 4x4 and said it should handle the "road" to the course, but soon after we'd turned off the single track road at Middlequarter and gone through a cattle gate, we were onto a deeply rutted dirt track, skirting a field. I'd never overtaken a cow before, but the formidable beast in front was not to be rushed, so off the road I went, carefully avoiding ruts that even my 4x4 might struggle with! Angus eventually stopped in the middle of a large field, saying it would do as our car park. He passed us a hand-written course map showing a rough layout of the course. There had been a course card at one time, but as the lay out of the course changed regularly, there was no current course card. As it turned out, there were flags at each hole, but we'd brought our own flag, just in case!
We'd not expected a manicured course, and it soon became obvious that Solles had been created by local enthusiasts for the love of golf. If there still exists in 2010 a course that mirrors how golf may have begun, then it is to be found over the machar at Solles. Here, the tees are to be found near to the previous green with the greens located on flat pieces of ground, one or two good shots distant from the tees. We saw no evidence whatsoever of the kind of ground preparation and intensive maintenance that is so typical of most conventional golf courses. 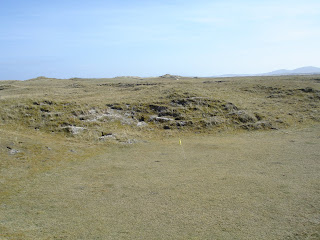 At Solles, the course had been laid out where the land lay. A couple of half bricks formed the tees and some old flag sticks, some with elderly yellow flags attached, provided welcome assurance that we had indeed located the greens. This is a view of the green on Punchbowl, the 6th hole. I imagine that Solles would not be understood by the golf tourist looking for a North Uist Augusta, but for us, it was a privilege to share a unique golf experience, which we imagined must be akin how the game originally developed. Admittedly, the condition of the course was not what might be expected (as the above photo of my ball on the 1st green shows) but as we got deeper into the machar, the influence of livestock on the course conditions lessened. The map Angus had given us was pretty accurate and course navigation was fairly easy, aided by my laser range finder, an incongruous intrusion of technology into such a natural golf course. However, the range finder did enable us to develop a course card as we went-

We named these holes ourselves, though some of the names may require an explanation

Pancake - Scottish cow dung (see above photo)
Quantum of... - could make a good starter for a title, should this course ever be filmed!
The Three Putters - our good selves
Graveyard - after the many elderly pieces of agricultural equipment rusting away in a nearby hollow.

We also took the liberty of making a 10th hole of 261 yards, played from beside the 9th back to the car park, so our flag came in handy after all! Solles is pretty quirky, so why not add a 10th hole? I scored 43 for the 10 holes, but Craig holds the course record with his lower score. I must ask him what he shot, next time I speak to him! For anyone visiting Solles as a consequence of this blog, the course has another absolutely stunning surprise in store. We'd noticed some walkers high on the dunes that dominate the seaward side of the course and we'd heard the gentlest of surf lapping on the shore, so we left our golf bags in the custody of a nearby sheep and went exploring. This is what we found 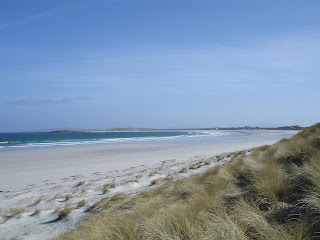 . If there is a more beautiful sight from a Scottish golf course, I've yet to see it. If and when that day comes, I'll be a very lucky man. Angus, it was a privilege to play Solles. Thanks for all of your help. 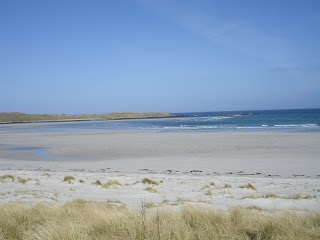