Craig and Stu had played Ballochmyle earlier in the year and really liked it, so I'd been keen to play it myself. When I finally managed that on 15 November 2010 (Happy Birthday, Claire!) the course was in great condition and a real pleasure to play. My only concern was that, like some other courses I could mention, Ballochmyle had taken most of the course signage away for the Winter, leaving visitors like me to plot their own way around as best they could. For example, the nearest tee to the 1st green turned out to be the 10th, with the 12th and 2nd located side by side 30 yards away through some trees. The nearest tee to the 5th green turned out to be the 8th, with the 6th tee located over 100 yards away, past the 7th green. Confused? - join the club! I'd managed to catch up with a couple of elderly ladies playing on the 3rd and had hoped to follow them round. However, they dodged the 6th and 7th holes, adding to my confusion. I had to ask other players and greenkeeping staff for directions four times. The 50% reduction in green fees in place over the Winter by the Ballochmyle club is a bargain, but I was trying to play golf rather than go orienteering with luggage. Some simple tee markers would have helped, but enough of that, because this is a really good golf course.


Ballochmyle is a 5672 yard par 70 parkland course, a few miles inland from the Ayrshire coast. As such, it's a wee bit off the golf tourist track, but don't let that put you off. The course starts with an easy downhill par 4, with OOB on the right, followed by a series of good parkland holes, with lots of mature trees waiting to catch anything wayward off the tee. I'd started pretty steadily and was only 3 over after 8 holes, with the short downhill 275 yard par 4 9th to come. 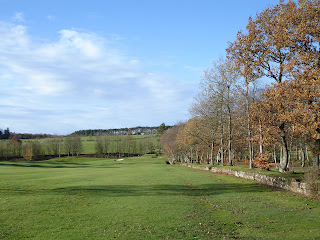 OK, the club had moved the tee about 20 yards forward and to the left, opening up what would otherwise have been a slight dogleg over high trees. However, there's a deep ditch down the right and a stream in front of the green to catch anything off line. This is the view from the tee. It was a cold and windless morning and the ball wasn't flying far, so how I managed to drive the green I don't quite know! 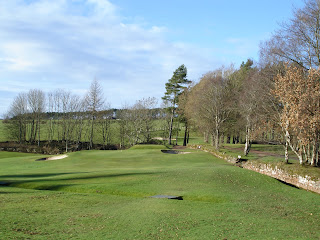 I'd have been happy with a birdie, but I holed the 12 foot right to left putt for a rare eagle. This is a view of the green. A really good hole. I'd gone out in 36, only 1 over par and made an easy birdie at the 10th. The 11th is a 387 yard dog leg right par 4. the drive is either through a narrow gap in the trees before turning sharp right for a downhill approach, or a blast over the trees, cutting off some of the distance. I took the cautious approach after watching the 2 elderly ladies footering about by the stream that lies half-hidden in the gap between the trees. I bogeyed that hole after a poor approach shot (and also bogeyed 4 of the last 5 holes!). I'd let a really good round slip away and needed a par up the last, a tight 487 yard par 5, for a 41 on the back 9. By the time I got to the 18th, the temperature had dropped alarmingly, and the first flurries of snow blew over the course. I hit a good straight drive and an equally good 3 wood through a narrow gap in the trees, leaving me an uphill wedge to the green, with the clubhouse windows (hopefully toughened glass!) lurking worrying close on the right. Anyone who has ever seen me play will know how easily a sh--- can appear without warning, so it was relief to get the wedge pin high, as shown here. I missed the putt, but I'd still gone round in 77, 3 under the net par of the course, so a good round on a very good course. Play it during the Summer, when the signage returns!


I'd been hoping to play at nearby Muirkirk on the way home, but by the time I got there it was raining hard and a sign on the closed clubhouse advised that scorecards could be obtained in several shops in the nearby village. I decided to press on to Douglas Water, a small 9 hole course deep in the South Lanarkshire hills. It was hidden under several inches of early Winter snow, but at least I now know where it is!
Posted by Alan McPherson at 17:18