Blairmore and Strone GC - Course no 577 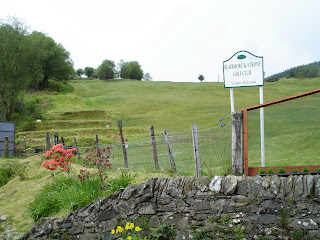 This is a very hilly 9 Hole moorland course lying above the villages of Blairmore and Strone on the River Clyde estuary.  The easiest way to get there is to take the Western Ferries' car ferry to Dunoon and then drive a few miles north and then east from there.  Both villages are very small, with barely 100 houses between them, so I thought it would be easy enough to follow local signs to the course.  There are no local signs, the course wasn't listed on my sat nav, I'd not bothered to write down the address, but how difficult could it be to find the course? Very difficult as it turned out.  I knew the course was generally above Strone, which hugs the shoreline, but High Road, the only road I could find that goes uphill in Strone, appeared to lead to a number of dead ends and/or forest.  High Road itself (an increasingly narrow single track lane) appeared to go nowhere in particular, so I turned back in search of directions from any local I could find.  Had I gone another 200 yards on High Road, I'd have found the course.  Some basic road signage would have helped, so if you ever try to play here, just remember that the course is further than you might expect along High Road.  The photo above is a view up the 9th, with the tees for the 1st hole on the left.  Below is another photo of the 9th green, showing the small bunker that offers limited protection against your approach to the 9th finishing in the car park (see my references to the 9th Hole below). 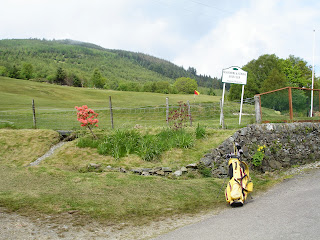 The course is very short, at only 1896 Yards, Par 31 from the Yellow Tees, but the greens are absolutely tiny and although in very good condition, were extremely difficult to read.  I'm sure there must be some flat areas somewhere on the course, but I'm not sure I found any and most of the greens had some tricky slopes.  Even if I landed my ball on a green, it seemed to run off into some hollow or worse still, down some steep slopes.  The 1st is a modest 205 Yard Par 4, slightly uphill.  You can see the flag OK from the tee, but not the flagstick itself and it's tricky to judge the distance.  I was marginally short of the green with a 3 Wood and hit what I thought was a good pitch and run with my wedge.  My ball went 3 feet past the hole and disappeared from view, finishing 30 yards away down the hill.  I scrambled an opening Par 4. 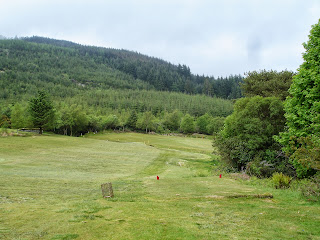 Next, a 130 Yard Par 3, as shown here.  This hole looks innocent enough, but miss the green at your peril.  I did, and had another 4.  A quick check of the scorecard told me that the 3rd was a 210 Yard Par 3 called "Bla' Weary" which loosely translates as "this is the biggest and steepest climb on the course and is extremely tiring, leaving you very short of breath if you rush, so take your time and try to remember where you hit your ball.  Chances are the bloody thing will have run sideways back down the hill anyway, so have fun looking for it."  This is the Stroke Index 1 Hole and rightly so.  I hit a full-blooded driver and found some light rough to the right and just short of the green, meaning my ball didn't run back down the hill and I'd an easy enough chip to the green.  2 putts later and another 4 on the card. 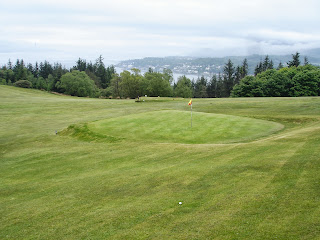 The 3rd is nowhere near the top of the course just in case anyone is hoping that would be the case.  The Par 3 4th, as shown here, is just as steep but is thankfully shorter, at only 154 yards, but it's also completely blind.  Stick to the right of the marker pole if you can and take 2 clubs more than you'd normally need for 154 Yards (I only took one more and was short).  Still, I managed a good chip and a single putt for my first par at Blairmore and Strone.  That's Dunoon in the distance and the 4th green in the foreground.
The 5th green is the highest point on the course, as shown here.  This hole is only 130 Yards, but it's uphill again, so take at least one extra club and aim well right, allowing the slope to take effect.  Go straight for the green and you'll probably finish on the next tee, beside the round bush to the left side of the first photo below.  I took an easy 7 iron and actually finished within 20 feet of the hole.  I missed the putt, but another par was OK. 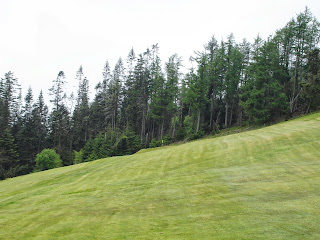 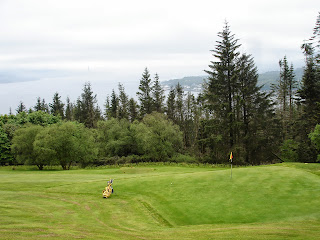 The 6th hole is a 234 Yard Par 3 slightly downhill.  For bigger hitters, remember you're looking at a tiny green with a 6 foot flag, not a big green that's far away.  The hole looks far longer than it actually is, so be warned.  I took a bogey 4 after missing the green from the tee.  The Par 4 7th is steeply downhill and at only 248 Yards is easily drivable if you can hit laser straight on this semi-blind hole (you can see only the very top of the flag from the Yellow tee).  I missed the green to the left but rescued a par by successfully reaching and holding the green from all of 20 yards! 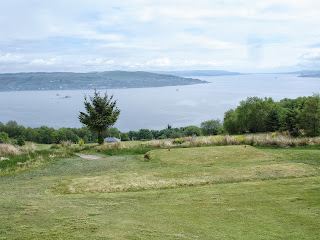 The 8th is a really tough hole, steeply uphill and at 304 yards is by some way the longest hole on the course.  I'd hit an awful drive and needed an 8 iron for my second, missed the green and had another bogey.  The climb up the 8th does however, get you into position for your drive at the 9th, one of the most dramatic closing tee shots I've come across for a long time.  The 9th is a 281 Yard Par 4 and very, very steep.  You see only the top half of a black and white marker pole and the roof the clubhouse, and you'll no doubt have read the Local Rule "A ball plugged and lost when seen to drop within the confines of the 9th fairway may be replaced by another and dropped as near to the position of loss as possible.  No Penalty."  You may be distracted by the view (and note the nuclear submarine in the background, close to its home port a few miles away at Coulport).  I'd taken an easy swing with my Driver, aiming slightly to the right of the Marker.  The correct line is over or left of the marker, almost straight at the clubhouse roof. 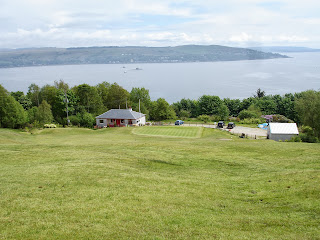 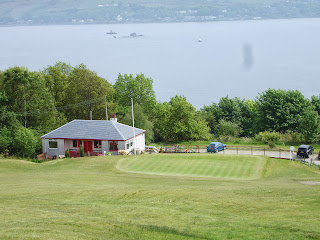 Extreme care is needed with your second shot, not least since your car will be parked a few yards away behind the green.  My car is the black RAV4 (the left one of the 2 black cars in these photos) was a reasonable distance away but the blue car was well within range.  It's really just a short chip towards the left of the green and let gravity take over.  A fuller shot just brings the car park into play. I managed to get within 4 feet of the hole but missed the birdie putt.  I was round in 35 gross, net 29.5 with 15 putts, just inside the par of 31 strokes.  This is a fun course and is well worth playing (if you can find it) despite the climbs.  It's also great value at only £12 a round.
﻿
Posted by Alan McPherson at 19:29