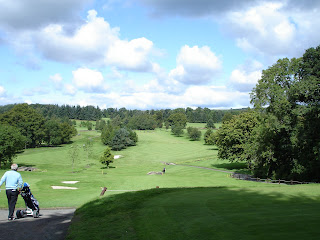 I played this excellent parkland course to the north of Glasgow on 25 August 2010, in the club's Balmore Gents Senior Open. The course was in great condition despite some recent heavy rain and at only 5517 yards, par 66 off the white Medal tees and no long par 5's, Balmore was ideal for a seniors event. OK, there are a few hills to contend with, but these features are well used in the course design and anyone reasonably fit wouldn't have any trouble getting round. Whether they score well here is another matter, as accuracy off the tee is important, as is avoiding the many trees. This is a view from the 1st tee, giving a good indication of the layout. I'd got there a bit too early, and after hitting some practice balls I scared myself silly on the practice green, which turned out to be (thankfully) much faster than those on the course itself. I like fast greens, but some of the slopes and pin positions on the practice green were almost impossible.


The 1st at Balmore is a 375 yard par 4 with a stream 150 yards out that some of the more elderly competitors found with their drives. I found my first bunker of the day with my 7 iron approach shot, and ended up with a bogey. The 2nd is an uphill 188 yard par 3 played into a light wind. I'd been playing my 3 wood pretty well of late, so it was a nasty shock when I hit the ball low and left off the heel of the club into the one spindly tree that obstructs the view to the green. The ball cleared the tree and a wall that runs across the hole, but was in a heavy rough and completely unplayable. A penalty drop onto a road and relief from that took me to some bare earth on the hole side of the wall. However, I'd hardly enough room to take a back swing and skulled my 3rd shot into the same area of heavy rough I'd just escaped from under penalty. This time, I couldn't find the ball, so definitely not the start I was looking for. I'd also let the group behind play through so the 2nd hole took 15 minutes and an inglorious 8 strokes. I dropped another 3 shots on the 3rd, the longest hole on the course at 448 yards, after finding an almost completely buried lie directly below the lip of a deep greenside bunker. Another bogey on the 4th after 3 putting the green and my handicap had gone after 4 holes. Had we been playing a Flag Competition, my round would have been over (first person out carries a flag and plants it where his last handicap stroke lands, the winner being the player who takes the flag furthest round the course, even up the 20th etc if he's playing under his handicap). 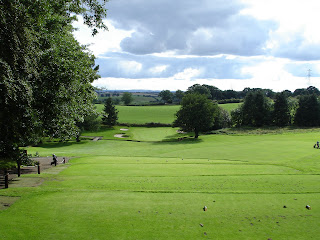 I'd clearly put myself completely out of contention in the competition, but respectability was still a realistic and achievable target on such a short course. Howewver, I staggered to the turn in a pathetic 48, a mere 14 over par. It was also remarkable that I was still enjoying the course given my error strewn front 9 (Balmore must be really good if I can say that after such a start!) The par 3's are particularly good, the best being the 16th, as shown here. This is a 150 yard hole, played from an elevated tee. I'd reckoned a 7 iron, but that was far too much club, as my ball hit the top of the big tree to the right of the flag. Luckily, I ended up at the front of the green and escaped with an easy par. I'd played reasonably well on the back 9 and needed to par the last, a 346 yard par 4, for a homeward 37 (5 over the par of 32). 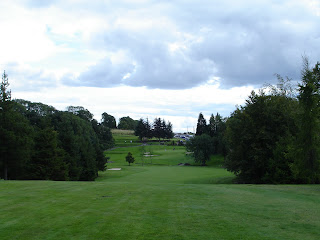 This is a view up the 18th fairway. I split the fairway with my drive and had only an 8 iron to the green. However, I thinned the ball into a stream in front of the green for a closing 7 and a total of 88, a remarkable 22 over par. Balmore is a really good course, well worth playing and I plan to enter next year's competition. After all, I've not got much of a score to beat! However, I think I'll not spend much time on the practice green next time and be more careful in club selection.
Posted by Alan McPherson at 18:47