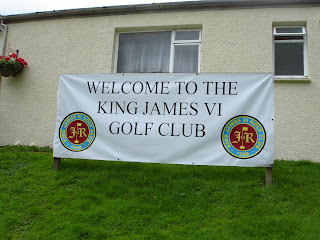 I played this excellent and thankfully very flat parkland course on 10 August 2010 after our exertions over the nearby Craigie Hill course. The course is 5684 yards, par 68 off the yellow tees and is situated in the centre of Perth on an island on the River Tay. The King James VI course is well drained with a wide variety of trees bordering lush fairways. The River Tay surrounds the course, although water is not always obvious as trees line the river banks and define most of the fairways. Accordingly, straight hitting is required and anything hooked on some holes will find a watery grave. This is another of the many Scottish courses designed by Old Tom Morris, and the club was named in tribute to King James VI's encouragement of "gowf." Access to the course is also unusual. The course did not come up on my car's sat nav, nor did the phone number, but at least I could key in the post code. However, within half a mile of my destination I was still in the city centre shopping and business area and when the sat nav told me I'd arrived, I was already past a car park, heading out of town. The only option was to park and go exploring along the riverside. I found a footbridge over the river running perilously close to the main railway line, leading to Moncrieffe Island. Ten minutes later and I'd found the course hidden behind trees at the end of a well-worn footpath. It was amazing to find that an 18 hole course could be so close to the city centre, yet so well hidden.


The afternoon forecast was for heavy showers and by the time got to this, the 2nd green, 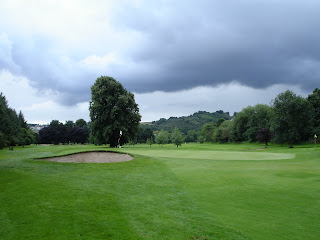 it was clear that rain was on the way, so as there was no-one in front, I opted to play as fast as possible to minimise the potential soaking. I played reasonably well on the front 9, but although the course was in great condition and had superb greens, it was tricky to score well. Either I'd be slightly out of position from the tee or just miss the greens in regulation, leaving awkward pitches over bunkers or the ever-present trees. Thankfully, my putter saved me from real problems. I'd got to the turn in 42 (with only 13 putts and in just over an hour!) and was still dry. It was time to slow down and risk getting wet, and this certainly had the predictable effect. Yes, it started raining! Nothing much, but enough to get the umbrella out. I bogeyed 10 and 11 in an effort to stay semi-dry, and my handicap was all but gone. I was therefore relieved and surprised to par holes 12-15, by which time the rain had stopped and the sun was out again. As the course area is restricted and the design is old, some of the holes here are pretty modest in length e.g. hole 12 is a 266 yard par 4 and although hole 15 is a 238 par 3 from the yellow tee, it is a modest 270 yard par 4 from the medal tee. It might be sacrilege to suggest a change, but I think hole 15 would be better as a shorter par 3, with stronger bunkering. See what you think if you play here one day. 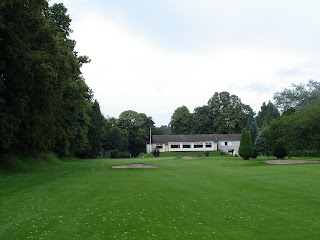 I was 9 over par standing on the 16th tee (another mistake looking at the score?) and by that time I'd caught up with players in front, breaking the rhythm of the round again. I'd also developed a hook from somewhere and with trees all the way down the left side of the last 3 holes, trouble lay ahead. Indeed, I hooked my second shot at the 393 yard 16th into trees to the left of the green for a bogey. An easy 6 iron at the 158 yard par 3 17th into a bunker led to yet another bogey and 11 over. The last hole is a straight 423 yard par 4, with trees and the river, all the way down the left. With loads of room on the right, my drive bounced off the trees into a deep divot and just as I thought things could not get any worse, the skies opened (just as I took this photo!) and getting off the course was a priority. In the circumstances, the double bogey was reasonable, but I'd gone round in a disappointing 81 overall, net 71 and a net 3 over par. I suspect I could have scored better had I taken my time and if I play here again, I'd certainly plan to beat 81 by a good few strokes.

Perth is a really attractive city and a great base for any golfing trip and I'd recommend the King James VI course as well worth playing. It's an easy walk once you get there, assuming you can find it!