Graeme and I here on 25 August 2011 after our game at Mearns Castle.  This is  a formidably hilly 18 hole parkland course set in rolling hills high above the village of Beith in upland Ayrshire.  It's not long at 5456 yards, Par 69 off the Yellow tees, but it's still a stiff test.  As the club's website says "If you like a challenge, you will not be disappointed as we have a course that will test all abilities. Beith is a hilly parkland course with spectacular views over the surrounding areas, from Ailsa Craig & Arran to Ben Lomond. Converted to 18 holes in 1996 with the addition of nine new holes, the rolling fairways, small undulating greens, along with the prevalent strong winds ensure the course is a tough, but fair test for golfers of all levels." 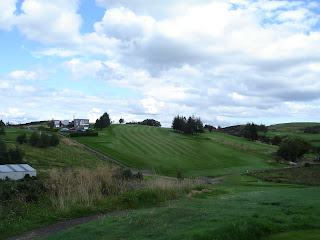 Being so high up, it's certainly exposed to the elements, as we were to find out soon after our round when a storm blew in, producing torrential rain (no doubt soaking the 3-ball that waived us through here on the 2nd.  When we passed them again on our way to the 17th, they were just leaving the 11th tee!)   These guys also let others play through, so fair play to them for that, but slow play can sometimes reap its own rewards.  The 2nd is a typical Beith hole, requiring a long drive to carry a stream and a long uphill shot (and climb!) to a large sloping double green shared with the 7th.  We'd both parred the 1st, a 289 yard Par 4 played steeply downhill short of a stream, then steeply uphill to a small plateau green.  The 1st flag had been yellow, so we both played to the yellow flag on the 2nd, ignoring the red flag, much nearer to the 2nd fairway.  That was a poor decision, as on closer inspection the red flag had a "2" on it! 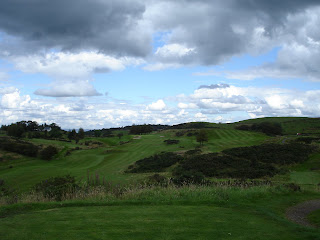 Beith had our full attention by then and we were also marvelling at the great condition of the course, despite its exposure to everything that the west of Scotland's weather can throw at it - which is very considerable!  The fairways were manicured and well cut and the greens were fast-running, true and even, with some subtle slopes to make putting a real test.  The 333 yard Par 4 3rd was played downhill initially to a narrow fairway edged by trees and gorse, but finding the fairway was the easy bit.  From there we faced an improbably steep hill and a marker pole, but in my tired state there's no way I was running forward to see what lay beyond the marker pole.  I'd somehow found the green with my 7 iron second shot just beyond another improbably steep downslope and won the hole with a bogey.  Next was a blind drive over a marker pole at the top of another hill.  another bogey there, but at least I'd not lost a ball, yet.  This is the 6th, a great 377 yard Par 4, played from an elevated tee.  We'd both hit good drives, only to see our balls run away down the neighbouring 8th fairway, away from our intended direction of travel.  From there, I'd a blind second shot and hit a decent 7 iron towards the green.  No doubt someone will find it some day (a Titleist with a single black dot below the number 4!) but that cost me a double bogey, quickly followed by another on the 7th.  I'd gone out in 43, spent most of my remaining energy climbing up and down every hill within sight of the front 9 and was loving every minute of it.  I suspect that you'd either love it or hate it.  I'd visited it a few months back, took one look from the car park and decided against playing it (as it would then have been my third course of that particular day).  So, as I'm not normally a great fan of hilly courses, I'd expected not to like this course.

The 10th Hole at Beith is possibly the most tiring I've played recently, and that's saying something after my endurance test over the Murrayshall course a few days earlier and on my recent Iona trip.  The 11th is only 345 yards and the drive is played from an elevated tee over the same stream that features on the 2nd and can be seen on the above photo from the 2nd tee.  I'd hit a good drive, but then faced yet another climb, with my 9 iron having to be played blind over a wall and some trees, past a cairn marking the site of the first clubhouse.  There's now no sign of that old building or how it was reached from the village and a seat would have been my choice of memorial to it! 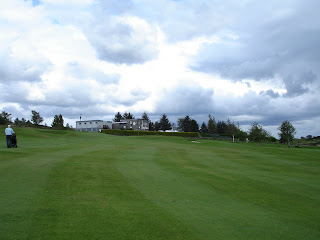 The back 9 is more open and looked like they were the holes added in 1996 to make Beith an 18 hole course.  Best hole on the back 9 was probably the last, a largely uphill 411 yard Par 4.  This is Graeme striding up the last fairway i.e. I'm lagging some way behind!  I was delighted to get a par at this hole and to go round Beith in 85, net 75, some 6 strokes adrift from the course par.  I'd hit the ball reasonably well and really enjoyed the course.  We just had time to get the car packed and head off for home before the skies opened, so good timing and a really good course in great condition.

My one reservation about Beith was the scorecard, a hideously offputting jumble of numbers and colours, complete with markedly differing match play and stroke play Stroke Indexes.  Indeed, I can't remember ever seeing another scorecard showing stroke play Stroke Indexes.  Does anyone have any ideas what that's about?
Posted by Alan McPherson at 20:28