Polly and I played here on 23 August 2011 after our differing exploits over the Murrayshall course the previous day.  Unlike Murrayshall, the Monifieth Golf Links are flat and as the names suggests, built on sandy linksland.  There are two courses here, the Championship course itself, which is used as a final qualifying course when The Open Championship is played at nearby Carnoustie and the shorter Ashludie Course.  Although the Ashludie is only 5123 yards, Par 68 and when we played it was used mainly by senior gents and ladies, don't go thinking that it is easy.  The fairways are narrow and bordered by heather and gorse and the greens were probably the fastest I'd seen all year.  Just to make it even trickier, some of the fairways were cambered and higher than the surrounding rough, meaning that anything hit even slightly offline might bounce off into the rough or worse still, impenetrable gorse bushes.  I was hitting the ball pretty straight off the tee, but my ball would sometimes take an awkward bounce, land short or run through the green.  Welcome to links golf.  Precision was called for on every shot, making Ashludie a hugely enjoyable test. 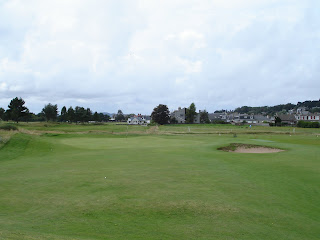 The toughest hole on the course is Hole 7, a 445 yard par 4 and deservely the Stroke Index 1 hole.  I'd hit a good long drive, but the fairway then becomes a plateau, some 5 or so feet higher than the surrounding rough, calling for a lazer straight second shot.  Now unlikely as it will seem to all who have seen me play recently, this is my ball, just short of the green after just such a shot, played with a long iron, would you believe.  A bogey from there was slightly disappointing, but I'd take it every time, given the disaster potential here. The Ashludie Starter's hut is in the distance behind the green, a healthy walk from the car park, past the 4 (or was it 5?) separate club houses of the various clubs that play over the Monifeith Links. 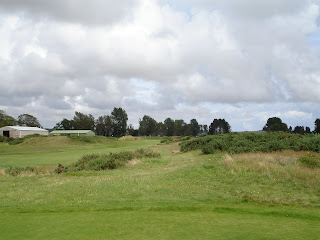 I'd managed to miss the heavy rough for the first 7 holes, but just as I was congratulating myself on negotiating the 7th, a hooked drive off the 8th tee into the long stuff, then heather, led to an ugly treble bogey.  I'd slumped to 41 at the turn after a decent start to the round.  If anything, the back 9 was even tighter.  I'd parred the 13th, a 259 yard Par 4, after hitting my 3 wood shot past the green to within a few yards of the OOB and someone's back garden.  This was Ashludie after all of the recent rain, so goodness knows how fast this tight course gets in dry, windy conditions! This is the 14th, a short 252 yard Par 4.  Anything right from the tee risks being lost and a ball hit left is only marginally safer.  I'd gone long and left, close to the previous hole's tee, but was still faced with a mound in front of the flag, making it tricky to hold the green with my lob wedge approach, leading to another bogey.

Ashludie was great fun and very easy walking after my slog around Murrayshall.  I'd gone round in 82, net 72, with 30 putts.  I'd also managed not to lose a ball, a feat in itself.   I was due to play a semi-final foursomes tie over my own course the next day (which we won!) and this lovely little links course was excellent preparation.  Ashludie may be the lesser of the two courses at Monifieth, but it's still well worth playing.  Just don't take it too seriously and enjoy yourself.  If you have the time, practice your long putting on the practice green behind the Ashludie Starter's hut.  When did you last go for a 100+ yarder and be happy with a 3-putt?
Posted by Alan McPherson at 20:24