Played this 18 hole parkland/heathland course on 2 August 2011.  Routenburn is one of 3 courses owned and operated by North Ayrshire Council.  I've yet to play its Ravenspark course, but I'm pleased to say that Routenburn is far superior to the uninspiring Auchenharvie course.  Routenburn is a modest 5362 yards, Par 66 laid out over high ground above the coastal town of Largs.  The views down the Firth of Clyde and across to the Isles of Cumbrae and Bute and beyond are really good and a great bonus to playing here.  I'd visited the course a couple of years ago but didn't venture beyond the unprepossessing Pro Shop, far less the very steep hill that dominates the 1st Hole.   It had to be done as part of the all-courses challenge the 3 of us are doing, but I wasn't looking forward much to playing here.  The Shop building and steep opening hill were still as uninviting, but I have to admit the course itself was a joy to play, so I got it badly wrong. 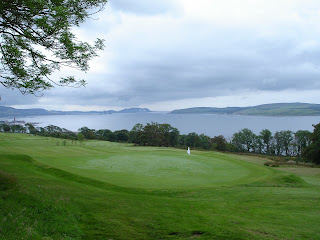 The course was in great condition, but it's a pity that the greens hadn't been swept clear of the rain droplets and dew that remained after heavy overnight rain, meaning they were extremely slow running.  Nearer the holes, where there was less water and other golfers' footprints were still visible, the greens ran a bit quicker, so putting was really tricky.  However, that's a minor criticism and would not have been a problem had the course been drier.  This is a view of the 3rd green, looking South West, and highlighting the water droplets on the green. The 1st Hole was as steep as I'd remembered it but overall, Routenburn is not nearly as hilly or physically demanding as some others I've played, so don't let first impressions put you off, as this course is well worth playing and at only £17.50 a round, is good value.

I'd been experimenting with some alignment changes in recent rounds as I'd become pretty closed at address and although I was hitting the ball better at Routenburn, the greens were pretty small and most approach shots were missing to the left, rather than to the right as previously, so scoring well was difficult .  Even so, I got to the turn in 39, 6 over par, so not bad.  However, I was annoyed to drop a shot at the 136 yard 8th, a blind Par 3 played over a small hill.  There was no marker post and since I'd been waived through by some slower players, I didn't want to delay matters by walking to the top of the hill.  The green is well right of centre so don't go for the middle of the hill! 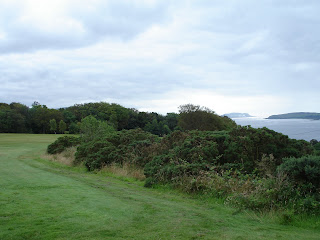 There's another oddity at Routenburn that's worth mentioning.  This is the view from the yellow tee of the 15th Hole, a 205 yard par 3 and unsurprisingly, the Stroke Index 2 hole.  Take a careful look as you approach the tee, as there's almost nothing to see from the tee itself.  The green and flag are just about visible in the middle of the photo.  The hole slopes from left to right so  just aim left of where you guess the green is and hope for the best.  I fluked a Par with a good single putt from 15 feet, but some pruning of the gorse might make the tee shot more inviting.

My target was to keep a 6 or worse off the scorecard and I managed this despite a final hole problem.  Some of the holes at Routenburn are close to housing and/or roads and there are a number of warning signs for golfers advising extreme care.  The 18th is one such hole, an otherwise innocent looking downhill 160 yard Par 3.  I'd hit an 8 iron off the tee, an almighty sh--- that cleared some trees and looked to be headed either for a main road or some houses.  No damage was done other than to my pride and the score, so a double bogey there left me with a 76 in total, net 66 or even net par, with 30 putts.  I'd kept a 6 off the card but clearly there's still some work to do to improve my alignment.

I thought the best hole at Routenburn was the 12th, a tough downhill 437 yard Par 4.  There's tons of room on the fairway and I'd hit a decent drive, but to the right side (alignment again!).  I then hit a good 7 Wood exactly where I'd intended over the middle of a hump in front of the narrow green.  Ideally, I'd have hit something shorter, but I was only carrying a few clubs (it was a very humid day!).  My approach shot finished within a foot of the hole, so I'd an easy tap in for my sole birdie of the day.  Maybe I got lucky, but it's not often I birdie such a long hole so easily, so well done me.  Great hole, though.  These are photos from the tee, the fairway and of the green itself, with my ball close to the hole. 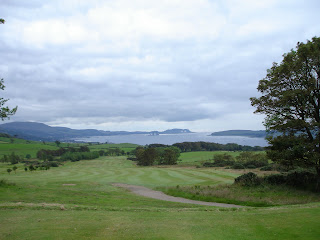 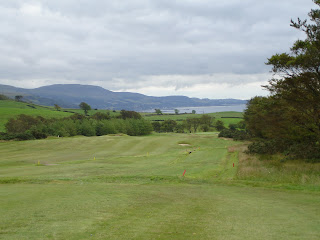 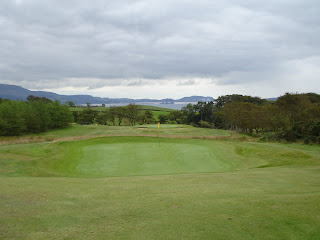